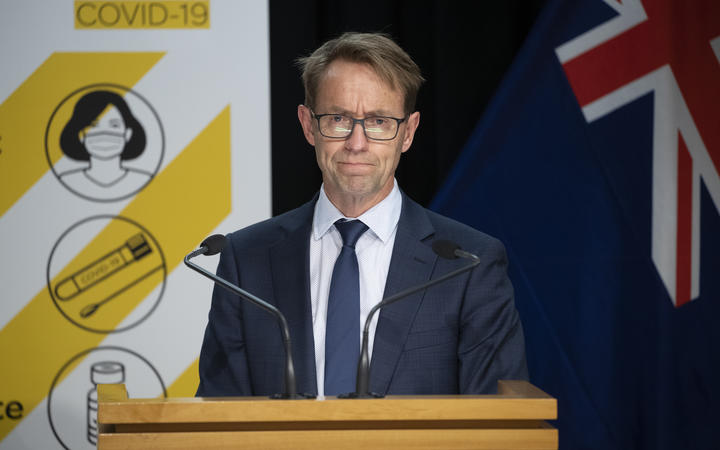 Ashley Bloomfield's been a regular in our living rooms over the past two years, on our TV, laptop and phone screens. The Detail talks to Newsroom's political team about how a public servant become one of the most recognised faces of our Covid-19 response.

There won’t be many – if any – other public servants who've had their face emblazoned on tea towels, coffee mugs and even bottles of hot sauce.

But the Covid-19 pandemic pushed the Director-General of Health Ashley Bloomfield into the limelight.

Over the past two years, Bloomfield's become a familiar face, as he fronted up day after day behind one of the podiums in the Beehive theatrette.

It was a surprise to many when, on Wednesday, Bloomfield announced he'd be stepping down in July.

Newsroom's senior political reporter Marc Daalder says during the 2020 alert level four lockdown, Bloomfield was, in a way, one of the only people you would have regular – if only one way – interaction with outside of your household.

"He became a symbol or a figure in the minds of those people, almost a character really," Daalder says.

"It just shows that, among the many other different changes that have come as a result of Covid, it's blurred that line between being a bureaucrat or a public servant and being someone who actually has quite an important public communication, public face role."

Without Bloomfield, the Covid-19 response would have looked very different, Daalder says.

"I think his answers have probably become a little bit more thoughtful too and he's gotten more comfortable with using his own experience or talking about his own interpretations of things, rather than just keeping to that very bureaucratic speak," she says.

"Partly that's because he's spent a lot of time with the people asking him the questions - he knows most of our names, he engages with most of us outside of those press conferences and has just over time become more relaxed as a result.

"And has probably just gotten more comfortable with the fact that these things are being livestreamed or broadcast live on television."

But it hasn't all been smooth sailing.

The Ministry of Health has faced tough questions about testing capacity, the vaccine rollout, contact tracing and the operation of managed isolation and quarantine.

"Over the last two years or so, he's become more like a politician, in ways that are good and bad. He's probably far more adept now at speaking at these press conferences and answering questions, but also he's developed that ability to answer a question that is somewhat different to the one that is asked.

"At that level it can be a little bit frustrating. It's understandable and it's probably a skill that most public servants, chief executives anyway, need to have. But it does get to that issue of transparency, are we actually hearing everything that's there?"

So how would Sachdeva rate Bloomfield's performance over the last two years?

"I think for the most part, we have done incredibly well - you only need to look at how we compare to the rest of the world.

"I think there have been some issues that have come up around testing and MIQ, and perhaps those were always inevitable, but I think it's worth noting that he is not perfect - and nor is anyone else for that matter - but I think overall that he would have good cause for satisfaction."

Follow The Detail on Apple Podcasts , Spotify, Stitcher, iHeart, Google Podcasts or wherever you listen to your podcasts.