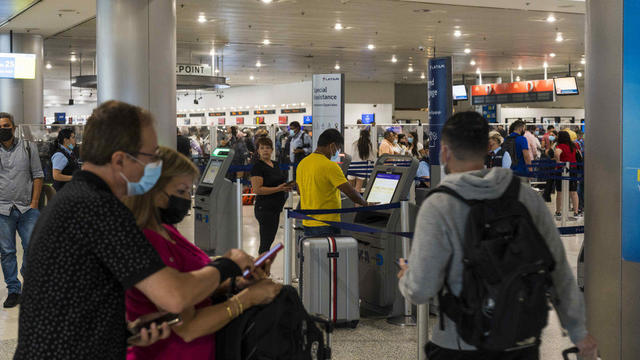 Multiple airlines have made mask-wearing optional for both passengers and employees following a judge's Monday ruling that struck down the Centers for Disease Control and Prevention's transit masking rules. Delta, United and American are among the carriers that will no longer require masks.
"Effective immediately, masks are optional for all airport employees, crew members and customers inside U.S. airports and onboard aircraft," Delta Air Lines said in a statement. Delta noted that the sudden nature of the ruling and the announcement from the Biden administration that the Transportation Security Agency would no longer enforce the mandate meant that passengers could experience "inconsistent enforcement during the next 24 hours."
"Remember to show understanding and patience with others who may not be aware enforcement is no longer required," the airline said.
United Airlines on Monday also announced that "Effective immediately, masks are no longer required at United on domestic flights, select international flights (dependent upon the arrival country's mask requirements) or at U.S. airports."
American Airlines also made mask wearing optional on Monday, saying "face masks will no longer be required for our customers and team members at U.S. airports and on domestic flights."
Alaska Airlines said Monday that masks would be optional in airports and on aircraft "effective immediately." Alaska also addressed the issue of passengers who had been banned from traveling over their refusal to comply with the mask mandate, saying "we will have some guests whose behavior was particularly egregious who will remain banned, even after the mask policy is rescinded."
All four airlines noted that those who choose to continue wearing face masks may still do so.
U.S. District Judge Kathryn Kimball Mizelle in Tampa on Monday voided the CDC's mask mandate, ruling that "the mask mandate exceeds the CDC's statutory authority and violates the procedures required for agency rulemaking under the APA."
The mask mandate had been set to expire Monday, but the CDC extended it until May 3 over concerns about the rise in cases caused by the BA.2 subvariant of the Omicron strain.
The U.S.'s largest air carriers had previously lobbied for the Biden administration to rescind the mandate, arguing that their aircrafts' air filtration systems combined with overall increased immunity from vaccinations made the mandate unnecessary. The carriers also pointed to mask mandates for restaurants and other indoor venues being lifted.
source: https://www.cbsnews.com/news/mask-mandate-airlines-allowing-passengers-to-go-maskless/