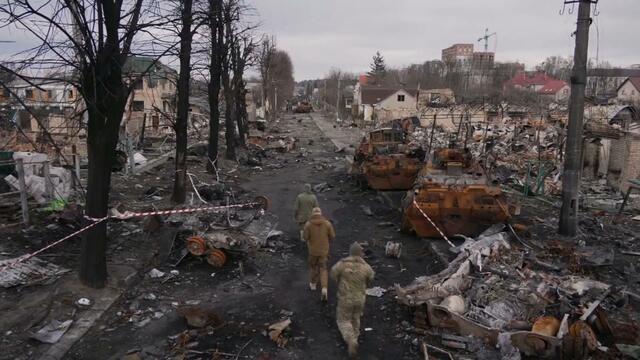 As Ukraine attempts to evacuate civilians from Mariupol, including some who remain trapped inside a steel plant, Russian forces have claimed victory in the city.  But Russia's recent defeats in and around Kyiv expose unresolved weaknesses, starting with Russia's armored vehicles.
To date, Ukraine says Russia has lost close to 3,000 armored vehicles — but only half in combat.
"It's not good military leadership if you are losing so many men and so much equipment," Ukrainian military expert Yuri Zbanatski told CBS News' Chris Livesay.
In the city of Bucha, a graveyard of Russian tanks remain behind — damaged by artillery, fragments and explosions.
Oryx, a military and intelligence blog which counts Russia's military losses in Ukraine on the basis of photographs sent from the war zone, reports that Russia has lost more than 460 tanks.
"They [the tanks] were abandoned or ran out of fuel, and it's finders keepers for these farmers," Zbanatski said. "Their personnel is not properly trained. Their commanding officers are not able to plan their offensive operations properly."
Russia's power is now being tested in the eastern Donbas region. The urban environment around Kyiv that gave Ukraine's fighters defensive shelter is now gone and replaced with open terrain and long-range artillery – including dozens of howitzers that Ukraine received from the United States.
source: https://www.cbsnews.com/news/russia-armored-vehicles-lost-ukraine/