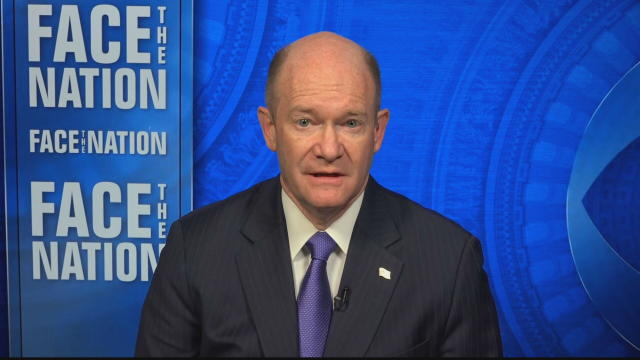 Washington — Democratic Sen. Chris Coons of Delaware said Sunday that additional funding to help combat the COVID-19 pandemic worldwide is "critical" to U.S. national security, as Congress remains in a standstill over providing supplemental pandemic relief.
"I think this is critical to our national security. We've already lost 1 million Americans," Coons said in an interview with "Face the Nation." "I think we can and should justify this additional spending as critical for our national security or as teaching our values, showing to each other the best in the human spirit and the most central tenets of the faith that inspires so many Americans."
President Biden called on Congress in March to approve an additional $22.5 billion in COVID-19 relief to continue vaccination and testing efforts in the U.S. and prepare for future variants, as well as to fund global efforts to combat the pandemic.
Senate negotiators reached an agreement to provide $10 billion to help the U.S. continue its fight against COVID-19, which omitted global pandemic aid. But earlier this month, Senate Republicans blocked the measure from moving forward after Democratic leaders declined to allow votes on an immigration-related amendment.
The amendment would have prevented Mr. Biden from winding down a Trump-era border restriction known as Title 42 that authorized U.S. border officials to swiftly expel migrants in order to stop the spread of a contagious disease. The Centers for Disease Control and Prevention announced earlier this month it would end the rule because of improving health conditions, but the move sparked backlash from Republicans and moderate Democrats who warned its end would lead to chaos at the border.
Coons said it will be "challenging" to end the standoff between Democratic leaders and Republicans over the additional COVID relief, but he hopes a winding down of Title 42 will be reconsidered "appropriately."
"We can separate that, we should separate that from delivering COVID relief that will protect American lives and other lives, billions of lives around the world," he said.
Another vote on the COVID relief would not come until at least late April, as senators are in the middle of a two-week recess.
Coons said he was "disappointed" that lawmakers could not come together to approve the additional aid, which the White House has said is urgently needed to fund immediate pandemic-related needs.
"Just because we're done with the pandemic doesn't mean it's done with us," he said. "The best way to protect the American people from the next variant that might kill more Americans and more people around the world is to ensure that the rest of the world has access to America's vaccines."
Coons also noted that there are "dozens" of countries that relied on vaccines developed by China and Russia that are not effective.
"This is also a great chance for us, in addition to protecting our own people, to show the rest of the world that we can be the charitable and caring nation we've long been and that we can help deliver innovation that protects billions around the world," he said.
source: https://www.cbsnews.com/news/covid-19-global-aid-national-security-chris-coons-face-the-nation/