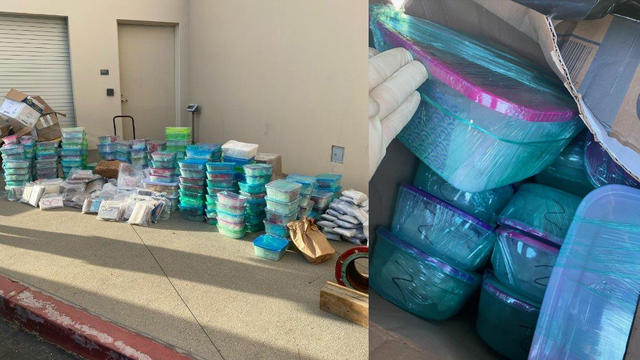 Two men face several drug charges after police say they were busted with more than 800 pounds of methamphetamine and enough fentanyl to kill 4.7 million people, a bust that authorities say is Orange County's largest in 16 years.
Edgar Alfonso Lamas, 36, and 53-year-old Carlos Raygozaparedes, have each pleaded not guilty to several felony drug charges and remain in custody on $5 million bail.
Lamas and Raygozaparedes were arrested after Buena Park police pulled over a minivan leaving a Buena Park home on March 17, according to the Orange County District Attorney's Office. At the home, the DA's office says officers recovered 821 pounds of methamphetamine, nearly 190 pounds of cocaine, and more than 20 pounds of fentanyl pills. Because a dose as small as 2 milligrams of fentanyl can be lethal, authorities say the amount recovered is enough to kill 4.7 million people.
"Fentanyl is cheap, it's easy to get and it is killing our children, our coworkers, and tens of thousands of innocent Americans who don't have to die," Orange County District Attorney Todd Spitzer said in a statement. Spitzer last year said he intended to charge convicted drug dealers with murder if they are linked to a fatal overdose.
Lamas and Raygozzparedes, who are both scheduled to make their next court appearance on June 7, face a maximum sentence of 37 years and four months in prison if convicted as charged.
source: https://www.cbsnews.com/losangeles/news/2-men-charged-after-enough-fentanyl-to-kill-4-7-million-people-found-at-buena-park-home/