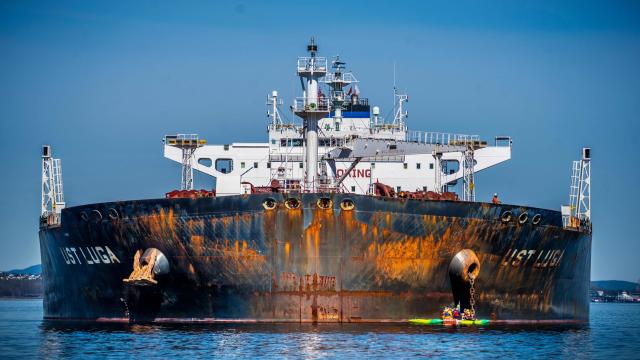 Copenhagen, Denmark — Environmental campaigners used kayaks and a dinghy on Monday to stop a Russian oil tanker from unloading its cargo south of Norway's capital, accusing Norwegian companies of "financing Russia's warfare" in Ukraine.   Greenpeace said its members chained themselves to the Hong Kong-registered Ust Luga, leased by Russian oil company Novatek, as it arrived at its destination, a terminal near Toensberg owned by Exxon subsidiary Esso. The tanker carrying a cargo of more than 105,000 tons of fuel had left St. Petersburg.
Esso spokeswoman Anne Fougner told Norwegian newspaper Dagbladet that the oil had been purchased before Russia invaded Ukraine. She added that Esso Norway "does not have other contracts for the purchase of products from Russia."
"Oil is not only at the root of the climate crisis, but also of wars and conflicts. I am shocked that Norway operates as a free port for Russian oil, which we know finances Putin's warfare," Greenpeace Norway head Frode Pleym said according to the Reuters news agency.
Several other activists were stopped by police before they could take part in the action, Norwegian news agency NTB reported.
In March the U.S. government banned imports of Russian oil in a move targeting the country's vast energy sector, which accounts for more than half of Russia's annual revenue.
Many European countries are far more reliant on Russia for oil and gas, making it hard to quickly cut their imports without damaging their own economies, but Esso Norway is among several that have stopped buying petroleum products from Russia since President Vladimir launched his war on Ukraine.
The European Union has begun discussing broader sanctions on Russian oil, including a possible boycott.
source: https://www.cbsnews.com/news/russian-oil-tanker-norway-activists-kayaks-stop-unloading-over-ukraine-war/