Texas Rep. Henry Cuellar is not the target of FBI investigation, attorney says 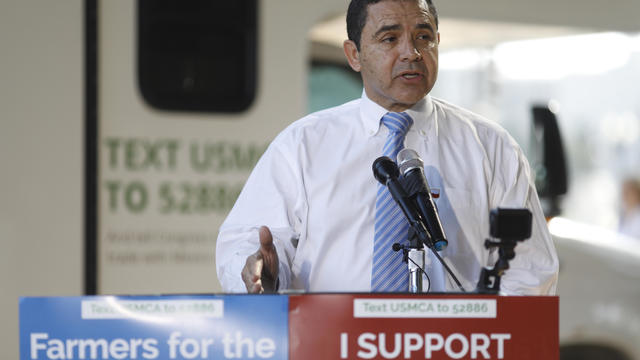 Henry Cuellar, a U.S. representative from Texas, is not the target of a federal investigation, his attorney Joshua Berman told CBS News Wednesday. Cuellar's home and campaign office were raided in January, but he denied any wrongdoing.
"The Justice Department has informed me that Congressman Cuellar is not a target of the investigation," Berman said in a statement to CBS News. "He continues to cooperate fully in the investigation."
The update was first reported by Fox News.
Previously, a source familiar with the investigation told CBS News that the activity at Cuellar's home was part of an investigation relating to Azerbaijan and several U.S. businessmen.
At the time of the raids, Cuellar's office said the congressman would "fully cooperate in any investigation. He is committed to ensuring that justice and the law are upheld." It did not confirm an ongoing investigation by the FBI.
Cuellar, a moderate Democrat, has represented the Rio Grande Valley's district since 2005. He is currently in a runoff election with his former intern, immigration attorney Jessica Cisneros. She previously challenged him in 2020 and lost by about four points. Cuellar won reelection that year by 18 points, but President Biden only won by 5 points, underscoring Democrats' problems along the border in Texas.
Runoff elections in Texas will take place May 24.
Aaron Navarro is an associate producer for the political unit at CBS News, focusing on House and gubernatorial campaigns as well as the census and redistricting.
source: https://www.cbsnews.com/news/henry-cuellar-texas-representative-not-fbi-investigation-target/