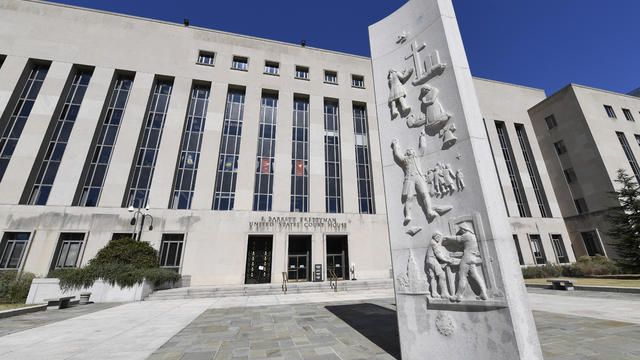 Two men accused of pretending to be federal agents to dupe Secret Service and other federal officials are set to be released to home confinement pending trial, but District of Columbia Magistrate Judge G. Michael Harvey granted the Justice Department's request to stay the ruling until 9 a.m. Wednesday to give prosecutors time to appeal the decision.
The FBI alleges that Arian Taherzadeh, 40, and Haider Ali, 35, have been posing as various officers and employees of the U.S. government, including members of federal law enforcement agencies, since February 2020.
Harvey said Tuesday that the defendants, accused of impersonating federal officers, were not dangers to the community and do not pose a risk of flight and obstruction. If there is no successful appeal, they will be released with GPS monitoring to the Virginia homes of their respective parents, who will serve as custodians.
Based on the current, single charge brought against the two men, Harvey said detention was not a presumption, and prosecutors had to either bring more serious charges against them or prove they pose a danger.
Harvey said prosecutors failed to provide evidence they had any connection to foreign intelligence.
The pair are accused of obtaining paraphernalia, handguns and assault rifles used by federal law enforcement agencies. The FBI claimed they used their false associations with the U.S. government "to ingratiate themselves with members of federal law enforcement and the defense community."
According to the affidavit, Taherzadeh, pretending to be a member of the Department of Homeland Security, provided U.S. Secret Service members and a DHS employee with rent-free apartments, "iPhones, surveillance systems, a drone, a flat screen television, a case for storing an assault rifle, a generator, and law enforcement paraphernalia."
There is not yet evidence they tried to bribe any other federal agents, Harvey said.
In Taherzadeh's case, the judge ruled the government hasn't yet proved he knowingly violated conditions of release on a previous charge in owning a gun. And, based on the evidence currently before the court, Harvey said it appeared that the reason for the men's impersonation was "they just wanted to feel like they were on the same level" as other federal agents.
Harvey said the government "appears to have a strong case" against Taherzadeh in terms of convicting him on the current charge, but said nonetheless that "in a case like this, release should be the norm."
"When you have a hammer, everything looks like a nail," Taherzadeh's attorney, Michelle Peterson, said in court on Monday.  She asserted her client is assisting in the investigation and is not a danger.
Regarding Ali's case, Harvey suggested he was not likely to flee because of his "extensive" connections in the U.S., including his wife and children. And his travel to the Middle East, as alleged in court documents, is not reason enough to detain him. The danger the pair posed, he said, is "the ultimate question," and the government has so far failed to make that case.
Based on the record before him, the judge said he could not hold the men.
His attorney said Monday that Ali would be "forever scarred" after the media "frenzy" surrounding the case.
source: https://www.cbsnews.com/news/fake-federal-agents-arian-taherzadeh-haider-ali-release-home-confinement/