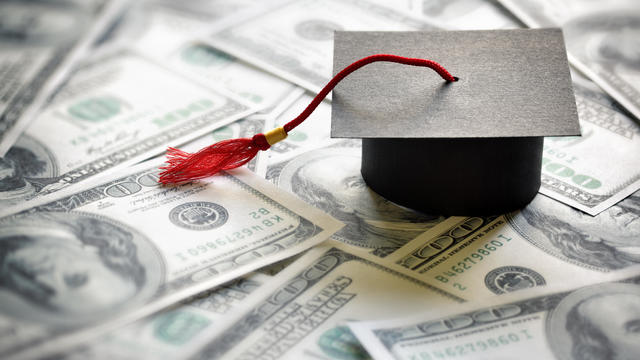 Millions of Americans would benefit if federal student loan debt were canceled. But as the Biden administration weighs giving borrowers more relief, a new study finds the percentage of people who would benefit from loan cancellation greatly depends on several factors, including how much is forgiven.
This comes as the Biden administration earlier this month extended the pause on federal student loan payments through August 31. The White House has said a decision on canceling debt would be made between now and the end of August.
"In terms of the loan forgiveness, there is no simple solution here, but we do know that our borrowers do need relief," Education Secretary Miguel Cardona told CBS News in an interview Thursday. He said the current pause is providing that relief.
"So we're trying to provide support for all borrowers while also looking for ways to provide loan relief for those programs like Public Service Loan Forgiveness, income-driven repayment, and we're continuing conversations about a more broad based loan relief program," Cardona said.
On the campaign trail, President Biden called for $10,000 in student loan cancellation, and for Congress to act, a move that would limit legal challenges. But some top Democratic lawmakers want the administration to go further – forgiving $50,000 in student loans through executive action.
New analysis by the Federal Reserve Bank of New York found the total outstanding balance for federally owned student loans as of the end of last year was $1.38 trillion. It estimates that limiting the cancellation to $50,000 in student loan debt would forgive the full balances of some 29.9 million – or 79% – of the 37.9 million federal borrowers. The average forgiveness would be more than $23,800 per borrower. The cost would be $904 billion.
Canceling $10,000 in federal student loan debt would result in $321 billion in debt being wiped out, and would eliminate the entire balances for some 11.8 million borrowers – or for 31.1% of borrowers. Under that plan, the average forgiveness would be more than $8,400 per borrower.
At the same time, there is a debate over whether there should be income limits to who receives student loan forgiveness. The analysis found putting a $75,000 income cap on student loan forgiveness to the $50,000 cancellation policy would result in the move costing nearly $400 billion less at $507 billion. Putting an income cap on the $10,000 proposal would cut the cost by nearly $140 billion to $182 billion.
The Federal Reserve Bank of New York found the smaller cancellation policy distributes a larger share of the benefit to lower credit score borrowers and to those who live in less wealthy and majority minority neighborhoods. Increasing the forgiveness amount increases the share of the total debt forgiveness for higher credit score borrowers and those living in richer neighborhoods.
While the Biden administration has not announced a determination on whether it has the legal authority to cancel student loan debt unilaterally, if it does move to do so, officials will also need to determine how much to cancel and if there will be any additional requirements.
In the meantime, the Education Department has also been focusing on fixing issues plaguing student loan borrowers and forgiveness and repayment plans. Since taking office, the Biden administration has canceled more than $17 billion in student loan debt including debt for borrowers defrauded by their schools, with permanent disabilities or in the Public Service Loan Forgiveness.
On Monday, officials announced changes to the Public Service Loan Forgiveness programs and Income-Driven Repayment plans. The Education Department said the fixes resulted in 40,000 borrowers immediately receiving debt forgiveness and some 3.6 million borrowers becoming at least three years closer to having their loans forgiven through income-driven repayment plans.
"We are working really hard not only to consider ways that we can provide debt relief but fix a broken system," Cardona told CBS News. "We worked really hard last year to fix the Public Service Loan Forgiveness system, and now we're fixing the income-driven repayment system, which means you shouldn't pay more than you can afford."
Cardona said they've cleaned up the system and are getting people on a path to repayment and forgiveness. He also said the administration is working to fix the cost problems that have caused the student debt crisis and to ensure college is a better return on investment.
CBS News reporter covering economic policy.
source: https://www.cbsnews.com/news/student-debt-cancellation-benefits-education-miguel-cardona/