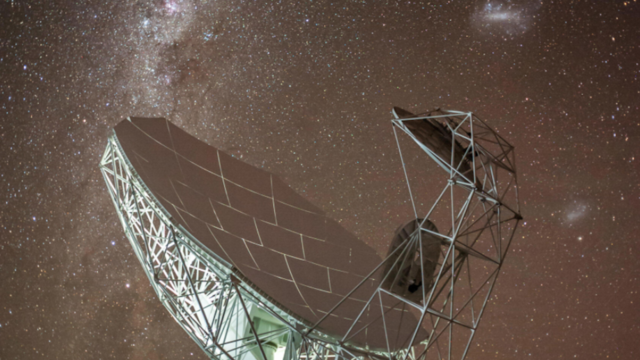 A powerful telescope in South Africa has detected a space laser, known as a "megamaser," that is 5 billion lightyears from Earth. Scientists named it Nkalakatha, an isiZulu word meaning "big boss."
Nkalakatha is the most distant hydroxyl megamaser of its kind ever detected, and it was discovered by the MeerKAT telescope on the first night of a survey that was expected to include 3,000 hours of observation. The team of scientists, working for the International Center for Radio Astronomy Research, published their work in The Astrophysical Journal Letters.
"It's impressive that, with just a single night of observations, we've already found a record-breaking megamaser," Dr. Marcin Glowacki, at the Curtin University node of the International Centre for Radio Astronomy Research, said in a press release. "It shows just how good the telescope is."
A Megamaser is normally created when two galaxies crash violently into each other, causing a burst of light. The MeerKAT is designed to capture the kind of light — which is on the "radio part of the electromagnetic spectrum," according to the astronomers — that Nkalakatha emits.
Going forward, the astronomers plan to use the MeerKAT to look deeply into narrow sections of the sky with the goal of learning more about how the Universe evolved over time.
"The OH megamasers act like bright lights that say: here is a collision of galaxies that is making new stars and feeding massive black holes," said Jeremy Darling, a professor at the University of Colorado, a megamaser expert and co-author of the study.
In their work, scientists noted that "the telescope is very new, so this find hopefully is one of many more to come."
source: https://www.cbsnews.com/news/astronomy-space-galactic-laser-discovered-africa-meerkat-telescope/