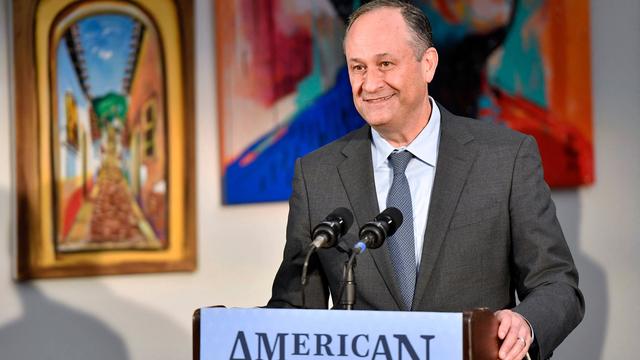 Now in its second year, the Biden White House is seeing some personnel changes — second gentleman Doug Emhoff's chief of staff announced she'll be leaving the job soon.
In a letter to the second gentleman's office, obtained exclusively by CBS News, chief of staff Julie Mason announced her departure, calling it one of the "toughest decisions," she's ever made but "the right one" for her children. Katie Peters, who is currently communications director for Emhoff's office, will serve as acting chief of staff until a permanent replacement is selected.
Mason, who has been Emhoff's communications director since Inauguration Day, has had several stints in the White House, working in both the Obama and Clinton administrations in the president's press office, as well as the offices of the first and second ladies. She was also the communications director for then-second lady Jill Biden during Obama's 2012 reelection campaign.
According to a source familiar with her decision, Mason is stepping back from public service to focus on her family and spend the summer with her two children.
Emhoff, an attorney, had limited experience in politics before assuming the role of second gentleman. A White House official says Mason's experience played a "significant role" in shaping the office and political strategy for the second gentleman. Emhoff is the nation's first second gentleman.
During his first year as second gentleman, Emhoff traveled to Japan — where he led the U.S. delegation to attend the Paralympic Games. He also joined his wife, Vice President Kamala Harris, on a trip to Paris, where his own schedule of events emphasized issues like gender equity. He has focused on drawing attention to issues like the need for quality childcare and the high job losses that struck women during the COVID-19 pandemic. Emhoff has also traveled to dozens of states in his current role, aiding the administration's vaccination efforts.
The letter outlined other changes in the second gentleman's office. Some members of the team are moving to new jobs in the administration. Megha Bhattacharya has been promoted to a new role in the West Wing and Rukku Singla, Emhoff's former head of policy, will join the Labor Department as a policy adviser for the "Good Jobs Initiative." Within Emhoff's office, Zaina Javaid will be promoted to director of public engagement and policy.
Staff changes aren't uncommon after an administration's first year. There have been several departures from the president and vice president's offices, with officials moving into other government agencies or into the private sector.
Ed O'Keefe and Nancy Cordes contributed to this report
Tim Perry is a reporter covering the White House for CBS News Digital.
source: https://www.cbsnews.com/news/second-gentleman-doug-emhoffs-chief-of-staff-to-depart/