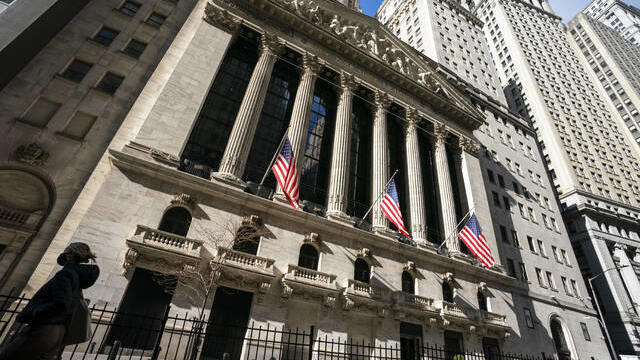 Technology companies led a broad slide for stocks on Wall Street as investors look ahead to the upcoming company earnings reporting season and what it will reveal about the impact inflation is having on corporate profits.
The S&P 500 fell 1.7%, adding to its recent losses. The Dow Jones Industrial Average fell 1.2% and the tech-heavy Nasdaq slid 2.2%. Both the benchmark S&P 500 and the Nasdaq are coming off their first weekly losses in four weeks.
Bond yields rose. The yield on the 10-year Treasury climbed to 2.78% from 2.71% late Friday. Bonds have been rising amid expectations of higher interest rates as the Federal Reserve moves to squelch inflation.
The market "is still reacting to what's happening in the bond market," said Willie Delwiche, investment strategist at All Star Charts. "You have yields, not just in the U.S. but around the world, moving sharply higher and that's putting pressure on (stocks) generally. That was the story last week, and it's the story this week."
Higher rates hurt all kinds of investments, particularly stocks that are seen as the most expensive, such as those of Big Tech companies. As bonds offer better returns for less risk, that makes pricey stocks less attractive, which is why the heaviest selling has been concentrated in technology and other growth stocks as inflation fears have rattled the market.
Technology stocks were again the biggest weights on the market Monday. Microsoft fell 3.9% and Apple shed 2.6%.
All 11 sectors in the S&P 500 fell. The index ended down 75.75 points to 4,412.53. The Dow lost 413.04 points to 34,308, while the Nasdaq slid 299 points to 13,412.
Small company stocks held up better than the rest of the market. The Russell 2000 fell 14 points, or 0.7%, to 1,980.
Energy stocks were among some of the biggest losers as they followed oil prices lower. U.S. crude oil prices fell 4% and Occidental Petroleum slumped 3.9%, the biggest decliner in the S&P 500.
Oil prices remain volatile amid Russia's invasion of Ukraine, which has put more pressure on global energy supplies. Global oil prices are up just over 25% for the year, though they have been easing somewhat throughout April.
Twitter was in focus after Tesla CEO Elon Musk said he wouldn't be joining the company's board after all. The stock rose 1.7%. Musk recently became the company's biggest individual shareholder and is now free to increase his stake.
Investors continue to remain uneasy about higher interest rates, Russia's war on Ukraine and China's effort to contain coronavirus outbreaks. In China, automakers and other manufacturers are reducing production after authorities tightened restrictions to help stem coronavirus outbreaks in Shanghai and other cities.
Wall Street will get several updates this week that could provide more clues about how the broader economy has been handling rising inflation.
The Labor Department on Tuesday will release its report on consumer prices for March, while the Commerce Department will release its March retail sales report on Thursday. Those reports have been closely watched as investors try to figure out how rising prices have been impacting consumer spending. Any significant slowdown in consumer spending would likely mean a sharper-than-expected slowdown in economic growth this year.
The latest economic updates come as investors anticipate a more aggressive shift from the Federal Reserve as it tries to temper the impact from rising inflation. The central bank has already announced a quarter-percentage point raise of its key interest rate.
Fed officials indicated in minutes from last month's meeting they were considering raising the U.S. benchmark rate by double the normal amount at upcoming meetings. They also indicated they would shrink the Fed's bond holdings, which would push up long-term borrowing rates.
Wall Street will also start to get more details about how individual companies performed during the first quarter and what they expect moving ahead.
"Investors will be looking to see how inflation is impacting corporate earnings," Delwiche said. "Are companies able to pass higher costs on to consumers or are they having to eat the costs?"
Delta Air Lines and JPMorgan Chase will report their latest financial results on Wednesday, while UnitedHealth Group, Wells Fargo and Citigroup will report their results on Thursday.
source: https://www.cbsnews.com/news/stocks-fall-nasdaq-inflation-2022-4-11/