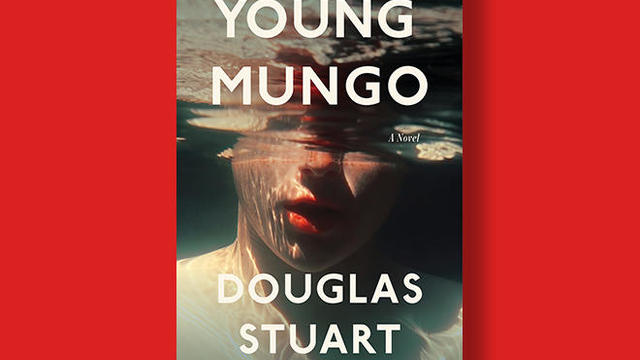 The Booker Prize-winning author of "Shuggie Bain," Douglas Stuart, returns with his latest novel, "Young Mungo," about a 15-year-old boy falling in love for the first time in a violently homophobic community. Unable to accept her son's sexual orientation, Mungo's alcoholic mother sends him off on a fishing trip with two men from her AA meeting, who promise to make a man out of him.
Read an excerpt below:
As they neared the corner, Mungo halted and shrugged the man's hand from his shoulder. It was such an assertive gesture that it took everyone by surprise. Turning back, Mungo squinted up at the tenement flat, and his eyes began to twitch with one of their nervous spasms. As his mother watched him through the ear-of-wheat pattern of the net curtains, she tried to convince herself that his twitch was a happy wink, a lovely Morse code that telegraphed everything would be okay. F. I. N. E. Her youngest son was like that. He smiled when he didn't want to. He would do anything just to make other people feel better.
Mo-Maw swept the curtain aside and leant on the window frame like a woman looking for company. She raised her tea mug in one hand and tapped the glass with her pearlescent pink nails. It was a colour she had chosen to make her fingers appear fresher, because if her hands looked younger, then so might her face, so might her entire self. As she looked down upon him, Mungo shifted again, his feet turning towards home. She fluttered her painted fingers and shooed him away. Go!
Her boy was stooped slightly, the rucksack a little hump on his back. Unsure of what he should take, he had packed it with half-hearted nonsense: an oversized Fair Isle jumper, teabags, his dog-eared sketchbook, a game of Ludo, and some half-used tubes of medicated ointment. Yet he wavered on the corner as though the bag might tip him backwards into the gutter. Mo-Maw knew the bag was not heavy. She knew it was the bones of him that had become a dead weight.
This was all for his own good and yet he dared stare up at her with a doleful look. It was too hot for his nonsense. He was fraying her nerves. Go! she mouthed again and took a swally of the cold tea.
The two men idled at the bend. They shared a sigh and a glance and a chuckle, before putting down their bags and lighting cigarettes. Mo-Maw could tell they were itchy to be gone – these narrow streets didn't like unknown faces – and she could see it took patience not to goad her boy on. The men were canny enough not to pressure Mungo, not so close to home, not when he could still bolt. Their slitted eyes kept flicking towards him, watching, waiting to see what the boy would do next, while their hands ferreted inside their trouser pockets as they peeled their ball sacks from their thighs. The day would be muggy and close. The younger man fiddled with himself. Mo-Maw licked the back of her bottom teeth.
Mungo raised his hand to wave up at the window but Mo-Maw glowered down at him. He must have seen her face harden, or perhaps he thought waving was childish, because he aborted the gesture and grasped a fistful of air, which made him seem like a drowning man.
In his baggy shorts and his oversized cagoule, he looked like a waif dressed in hand-me-downs. But as he pushed the cloud of curls away from his face, Mo-Maw saw his jaw tighten, and she was reminded of the determined young man that he was becoming. She tapped the glass again. Don't you scowl at me.
The younger of the two men stepped forward and laid his arm across Mungo's shoulders. Mungo winced at the weight. Mo-Maw saw him rub at his sides, and she was reminded of the tender purple bruises that were blooming across his ribs. She tapped the glass, Oh fur God's sake, jist go! At this, her son lowered his gaze and let himself be led away. The men were laughing as they clapped her boy on the back. Guid lad. Brave lad.
Mo-Maw was not a religious woman but she stretched her pink fingernails to the heavens and wiggled them as she cried hallelujah. She tipped her tea into the parched spider plant, and filling her mug with fortified wine, she turned up the music and kicked off her shoes.
Excerpted from "Young Mungo" © 2022 by Douglas Stuart. Reprinted with permission of the publisher, Grove Press, an imprint of Grove Atlantic, Inc. All rights reserved.
For more info:
source: https://www.cbsnews.com/news/book-excerpt-young-mungo-by-douglas-stuart/