Val Rogosheske, one of the first women to run the Boston Marathon, returns 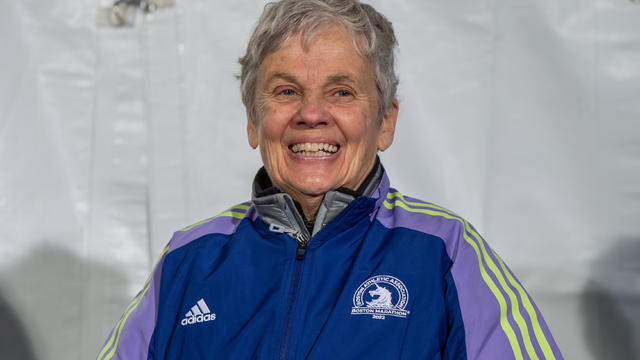 The 126th Boston Marathon is particularly special, as it marks 50 years since women were first allowed to officially run the race. And back on the course this year is Val Rogosheske, one of the original eight women who helped make that happen in 1972.
Now 75 years old, according to Women's Running, Rogosheske is on another team of eight women, all running in honor of the huge milestone for women's sports.
The team is comprised of women who have made a powerful impact in their communities and the world, including Mary Ngugi, who helped found the Women's Athletic Alliance and raises awareness against domestic violence; Paralympic gold medal winner Manuela Schär; Melissa Stockwell, the first female American soldier to lose a limb in active combat; Sarah Fuller, the first woman student-athlete to suit up for an SEC football game; U.S. Women's National Soccer Team star Kristine Lilly; DACA recipient Jocelyn Rivas, the youngest Latina to ever run 100 marathons; and Verna Volker, the founder of Native Women Running.
Minnesota native Rogosheske and seven others, Nina Kuscik, Kathy Miller, Elaine Pederson, Ginny Collins, Pat Barrett Shore, Frances Morrison and Sara Mae Berman paved the road in 1972 for this team to run.
Roberta Gibb was the first woman to run the full marathon in 1966 after hiding in a bush until the race began. The next year, Katherine Switzer was the first woman to obtain a bib number after the then-men's only race did not have a gender question on the entry form. It was that race where she was famously attacked by a B.A.A. official at about 2 miles in. Despite finishing, she was disqualified.
"I hadn't met the other seven women until we gathered on the start line. So we were huddled off to the side, so excited, and knowing that eyes were on us," she told CBS Boston. "Because many women, many people, didn't think that we should be running marathons. So I think we knew that none of us were going to drop out. It was going to be do or die and we all finished."
Rogosheske finished sixth out of the women's division that year with a time of 4:29:32. The next year, she finished ninth with a time of 3:51:12, and in 1974, she finished the race in eighth place with a time of 3:09:38.
But this year, she's not going for time, and she'll be surrounded by 14,000 other women, according to the Boston Athletic Association.
"It does make me tear up sometimes," she told CBS Boston. "It is hard to imagine going from that small number. ... It just makes me feel so good to know how opportunity has expanded for women and how women are seizing the moment and taking advantage of it."
Rogosheske was also named an official starter for the professional women's division.
Also joining Rogosheske this year are her two daughters, Abigail and Allie, as well as her cousin — one family making up half the number of women originally allowed to run just a few decades prior. She said her daughters have insisted that they will run alongside her throughout the course.
Her plan of attack for the 26.2-mile journey is to run hard for 30 seconds, walk for 30 seconds, and repeat.
"My joints love it," she said.
Surrounded by thousands of women who have followed in her footsteps, Rogosheske said she hopes that even more women pursue the sport, and take the lessons of running off the road and into their daily lives.
"In the area of running, even if you think running's not for you, give it a try. Do the walk-run approach. Do something just to try it," she said. "Even beyond running, if there's something you want to do, just go for it. There's no reason you can't do it."
Li Cohen is a social media producer and trending reporter for CBS News, focusing on social justice issues.
source: https://www.cbsnews.com/news/boston-marathon-val-rogosheske-first-eight-women-50-years-later/