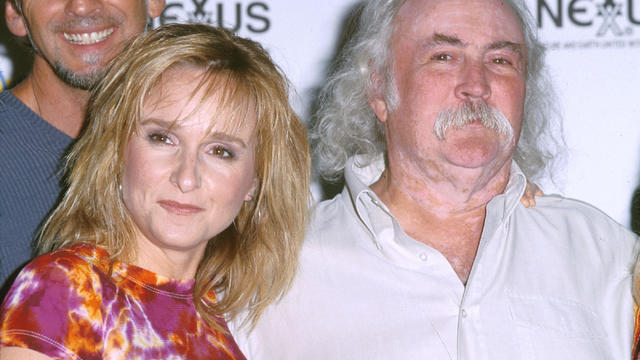 Following the death of folk-rock singer David Crosby at age 81, his friend and fellow musician Melissa Etheridge spoke out about the loss and the special connection they shared. Crosby was the biological father of the two children Etheridge shared with her ex-partner, Julie Cypher.
"I am grieving the loss of my friend, and Bailey's and Beckett's biological father, David," Etheridge wrote in an Instagram post on Thursday. "He gave me the gift of family."
Crosby, who cofounded The Byrds and Crosby, Stills & Nash, was an acquaintance of Cypher and Etheridge and was their sperm donor.
A post shared by Mother, rockstar, activist 🎶 (@melissa_etheridge)
Crosby and his wife, Jan, had struggled for years to to have a baby and in 1995, they welcomed their son, Django.
In a 2000 interview with CBS News' "60 Minutes," Etheridge, Cypher and the Crosbys opened up about their families. Etheridge and Cypher spoke about wanting a child when they visited the Crosbys in Hawaii after Django was born, and Jan Crosby proposed the idea that her husband could help.
"I was fortunate enough to get pregnant and have a baby," Jan Crosby said. "And I was holding (Django) in my arms when I heard them talking. And it fell out of my lips. I didn't think about it. I didn't even ask him first. And I was kind of surprised I said it, too. ... I believe I said 'What about David?'"
David Crosby quickly agreed.
"Was there any hesitation in my mind about trying to help them? No. None," he said. "The truth is, I probably shouldn't say this, but I don't even think it should be a big deal. I think it's such a natural thing that a straight couple would do for a gay couple, if they were friends."
"I will forever be grateful to him, Django, and Jan," Etheridge wrote in her post about Crosby. She called her friend a "true treasure" and said "his music and legacy will inspire many generations to come."
Crosby didn't raise the kids with Etheridge and Cypher, but said: "If, you know, in due time, at a distance, they're proud of who their genetic dad is, that's great."
Beckett Cypher died in 2020 at the age of 21. Etheridge released a statement saying opioid addiction was behind his death.
Bailey Cypher is now 25 years old. Etheridge has two other children from a previous relationship.
Crosby also has three other children from previous relationships, including a son, Raymond James, who was placed for adoption in the early 1960s. Crosby reunited with Raymond in the 1990s, and the two of them performed together along with musician Jeff Pevar in a group called CPR.
Crosby's iconic career included writing or co-writing classic songs including "Eight Miles High," "Wooden Ships" and "Almost Cut My Hair." He also released eight solo albums.
Caitlin O'Kane is a digital content producer covering trending stories for CBS News and its good news brand, The Uplift.
source: https://www.cbsnews.com/news/david-crosby-dies-melissa-etheridge-biological-father-of-her-children/