What are war crimes and could Putin be prosecuted for them? 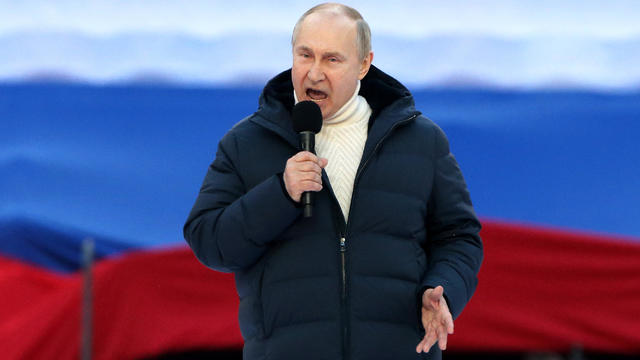 London — As horrific scenes were revealed in the wake of Russian troops pulling out of the town of Bucha in Ukraine, President Joe Biden on Monday accused Russian President Vladimir Putin of war crimes.
"He is a war criminal," Mr. Biden said. "I think it is a war crime. ... He should be held accountable."
The United States had already formally accused Russian forces of committing war crimes in Ukraine, and a number of national and international organizations have opened investigations, collecting evidence to build cases. But could Putin himself ever face a war crimes trial?
There are a number of international treaties — the Geneva Convention and the Geneva Protocol being two of the most important — that establish international legal standards for warfare. Any violation of those standards is a war crime that can be prosecuted at the International Criminal Court (ICC) in the Hague, and can result in imprisonment for perpetrators.
National governments, unilaterally or in partnerships, can also conduct their own war crimes investigations and prosecutions based on their own laws or the principle of universal jurisdiction, which determines some war crimes to be so extraordinary that they shock the conscience of humanity as a whole and therefore can be prosecuted anywhere.
Deliberate attacks against civilians are war crimes, as are "methods of war that are inherently indiscriminate and that simply can't make the distinction between the civilian population and armed forces," Jim Goldston, executive director of the Open Society Foundations' Justice Initiative, told CBS News.
Goldston said there were many indications that Russia was committing war crimes in Ukraine.
"There is an enormous effort now underway … to kind of hoover up all this information and organize it, that looks at where military forces are located, what are the targets, what are the structures being targeted, and gathering that together with testimonies that are being reported of people who are being victimized in these areas," he said.
All of the information being gathered could be used as evidence in possible war crimes trials at the ICC or in separate tribunals.
"One of the challenges in these kinds of investigations, though, will be to demonstrate the linkage between what is happening on the ground and those who have military or political responsibility for ordering these attacks," Goldston said.
"Traditionally in the international criminal tribunals, it has been very difficult to take [war crimes and crimes against humanity] all the way up to the top," Philippe Sands, a law professor and Director of the Center on International Courts and Tribunals at University College London told CBS News' partner network, BBC News.
Sands is among a number academics and former world leaders calling for the establishment of a special international tribunal modeled on the Nuremberg Trials, which were held for Nazi leaders after World War II, to hold Russia's leaders to account for the crime of "aggression" in Ukraine.
"A crime of aggression is waging an illegal war," Sands said. "It's part of international law, it's part of the law of Ukraine, and it's pretty clearly established in the present case, because there's no justification."
In the case of Russia's invasion of Ukraine — barring an extremely unlikely referral from the United Nations Security Council, where Russia holds veto power — the ICC does not have jurisdiction over the crime of aggression, so a separate tribunal would be necessary for any indictment. But because it is the act of waging an illegal war, it could be easier to attribute it to Putin himself.
"The crime of aggression is virtually, by definition, a leadership crime," Goldston said. "Only leaders have the power to actually invade another state, or a small circle of folks around them who have the political authority to actually make that happen."
If such a case did get off the ground, it's still unclear whether Putin himself could be successfully prosecuted, or what an indictment might mean for him.
"What happens if there were a tribunal that were to indict him? It would face challenges. One, of head of state immunity. The law on the immunity of someone who's head of state is debated, certainly, depending on the jurisdiction that is bringing the charges. And then, just the physical question of how you would get custody over somebody like that is huge," Goldston said.
"But there are damaging effects of indictment, short of custody," Goldston added. Pointing to the indictments of the former political and military leaders of the Bosnian Serbs, he said: "The indictments themselves, the public nature of the charges, I think it's fair to say, acted to stigmatize them, to isolate them politically, to make it untenable for them to participate in political negotiations and diplomatic negotiations. So indictments alone can have an effect, even short of arrest."
Haley Ott is a digital reporter/producer for CBS News based in London.
source: https://www.cbsnews.com/news/ukraine-russia-war-crimes-what-are-they-and-could-putin-be-prosecuted/