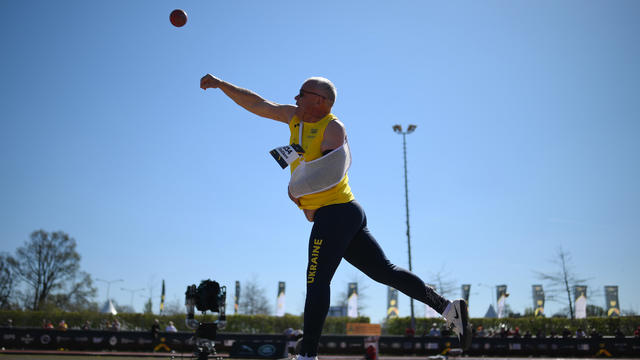 The Invictus Games are underway and some of the first medals won have been earned by Ukrainian athletes. On Sunday, Rodion Sitdikov, a National Guard veteran, won the gold medal in shot put. "Glory to Ukraine!" the team wrote on Facebook when announcing the win.
The Invictus Games, an Olympic-like competition where wounded veterans from all over the world compete in various sports, were created by Prince Harry in 2013. The games were postponed in 2020 and 2021 and are now underway in The Hague, in the Netherlands.
Україно 💙💛 Маємо першу медаль на Invictus Games The Hague 2020 ! Родіон Сітдіков виборов золото у штовханні ядра з результатом 9,46 м! Слава Україні!
In the first few days of the games, several other medals were earned by Ukrainian athletes. Artem Lukashuk and Ivan Geretsun won silver and bronze in the long jump, according to a division of Ministry of Culture and Information Policy of Ukraine.
Viktor Legkoduh, who uses a wheelchair, also won gold in shot put on Monday, the team announced on Facebook. Legkoduh fought for Ukraine against Russia in 2014 and received a severe gunshot wound to his back, according to a bio about the veteran.
The team continued to share news about their wins on Facebook on Monday. The country's archery team took home silver. Anna-Sofia Puzanova won a bronze medal for archery. When she received her medal, she held up a plaque honoring her mother, Yulia Payevska, a paramedic who is being held captive by the Russian military, according to the team and local reports.
The wins come as Ukraine is fighting against Russia during an unprovoked war that has destroyed many Ukrainian cities, killed thousands and forced millions to flee the country. At least seven people were killed in Russian airstrikes in Lviv on Monday, according to the regional governor.
The athletes from Ukraine were given special permission to compete at the games by President Volodymyr Zelenskyy, BBC News reports. At the start of the Invictus Games on Saturday, Prince Harry shared a message about Ukraine: "You know we stand with you. The world is united with you and still you deserve more."
During his speech at the opening ceremony, Harry said that the Ukrainian team told him they came "not simply to show [their] strength but to tell [their] truth. The truth of what is happening in [Ukraine]." He said his hope was that the Invictus Games "creates the opportunity in how we as a global community can better show up for you."
CBS News has reached out to Team Ukraine and the Invictus Games for more information and is awaiting response.
Caitlin O'Kane is a digital content producer covering trending stories for CBS News and its good news brand, The Uplift.
source: https://www.cbsnews.com/news/ukrainian-war-veterans-win-first-invictus-game-medals/