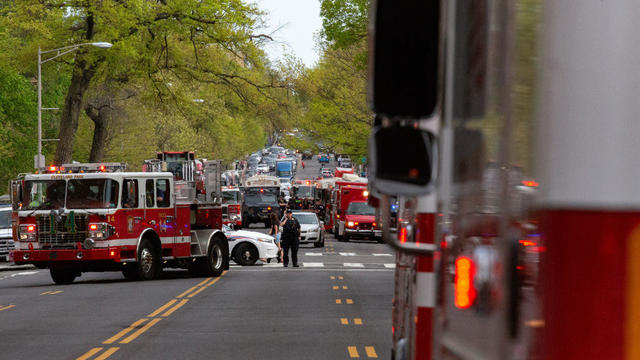 The man who opened fire from a D.C. apartment Friday, wounding four people before dying of an apparent self-inflicted gunshot wound, had a major stockpile of weapons and ammunition in two apartments he was renting, police said Monday. No one was killed in the shooting, but two people remain hospitalized in critical condition, officials said.
Police recovered six guns, three of which were fully automatic, in the apartment that the shooter — identified as 23-year-old Raymond Spencer — was firing from. Metropolitan Police Chief Robert Contee said Spencer fired more than 200 rounds during the shooting, and more than 800 unused rounds were found in the apartment.
In another of Spencer's apartments — this one in Fairfax, Virginia — authorities found three more guns and "thousands" of rounds, Contee said.
"This was very much a sniper-type setup," Contee said on Friday, adding that Spencer appears to have either livestreamed or recorded and posted a video of the shooting online.
Contee said Monday that Spencer rented the Fairfax apartment in February 2021, and had rented the D.C. apartment in January 2022. Police believe that all of the firearms were purchased legally.
"These are not inexpensive firearms," Contee said. "And we want to get to the bottom of that."
LIVE: Mayor Bowser Holds Public Safety Briefing with @DCPoliceDept https://t.co/bLilgAfYrj
The shooting took place near Connecticut Avenue and Van Ness Street NW in D.C. on Friday afternoon. Four people — a woman in her 30s, a woman in her 60s, a 54-year-old man and a 12-year-old girl — were wounded.
source: https://www.cbsnews.com/news/raymond-spencer-washington-dc-northwest-shooter-weapons-stockpile-rifles/