115 people from one N.J. high school had tumors, investigator says 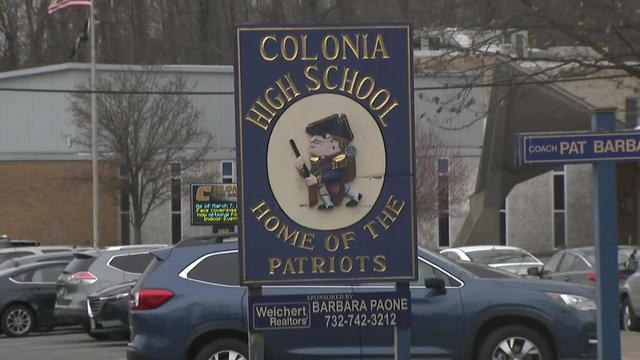 A man investigating his former high school in New Jersey says he has counted 115 people who attended or worked there have had a rare brain tumor. Al Lupiano, an environmental scientist, began investigating Colonia High School in Woodbridge when he realized several people who attended the school had rare tumors – just like he had.
Lupiano began counting how many people associated with the town were effected. "I started doing some research and the three became five, the five became seven, the seven became 15," he told CBS News York.
He has continued to update followers on social media and on Thursday, said the list stood at 115 people who had either malignant or benign tumors.
"While we have not yet determined if any contaminant is present, the only link up to this point is that everyone spent a significant amount of time at the school," Lupiano wrote in his Facebook post.
4/24 UPDATE: The radiological team charged with looking for both radiation and radon has concluded. I am being told...
Lupiano, who graduated from the school in 1989, himself was diagnosed 20 years ago and said he still suffers lingering issues, CBS New York reports.
Last year, his sister – who also went to the school – found out she had a primary brain tumor, which turned out to be stage 4 glioblastoma, he told CBS New York. "Two hours later, we received information that my wife also had a primary brain tumor," Lupiano said. His wife graduated in 1991.
After his sister passed away, Lupiano wrote a lengthy Facebook post as well as an article in a local newspaper in March, asking for people in the area for help in reporting cases of brain tumors. "As previously stated, there is basically one medically proven cause of rare brain tumors like ours – radiation," he wrote.
Glioblastoma is an aggressive type of cancer that can occur in the brain or spinal cord, according to the Mayo Clinic. It is the type of brain tumor that Arizona Sen. John McCain died from in 2018.
The cause of glioma, the tumor that occurs in the brain or spinal cord, is not known – like most tumors, Mayo Clinic says. Age, exposure to radiation and family history are all risk factors.
Woodbridge Mayor John McCormick told CBS New York the school, which was built in 1967, was built on "virgin land" in the woods. "The high school was the first thing to be there, so there was probably nothing in the ground at that time," he said. "The only thing that could have happened, potentially, was fill that was brought in during construction. We have no records 55 years ago."
The mayor has reached out to the state Department of Health, Department of Environmental Protection and the Federal Agency for Toxic Substance and Disease Registry, according to CBS New York. The school district's superintendent, Dr. Joseph Massimino, said in March that he was waiting to hear from the environmental agencies on next steps.
Lupiano said he has had meetings with county, state and federal agencies, which he said in a March 25 post "are going well."
In a post Saturday, Lupiano said a radiological team that was looking for radiation and radon concluded their search and he was told results would be made available in two to three weeks.
"While I am pleased with the survey and the response for Woodbridge Township, I cannot understand why additional testing is not beginning tomorrow," he said. CBS News has reached out to Lupiano and is awaiting response.
In a joint statement to CBS News, the New Jersey Department of Health and the state's Department of Environmental Protection said the agencies "are aware of the concerns raised by local residents, particularly as they relate to Colonia High School, and are partnering with Mayor McCormac and Woodbridge Township to better understand the issue and determine whether any relevant environmental exposure concerns are present at the site."
"The Departments stand ready to assist Woodbridge in reviewing any environmental data it collects to determine appropriate next steps," the statement reads.
The Department of Health will work with the federal Agency for Toxic Substance and Disease Registry and will conduct a public health assessment and evaluate the potential for health effects. "We thank Mayor McCormac [sic] and the local residents for raising these concerns and we ask for patience as we pursue the science to try to identify answers," the statement reads.
CBS News has reached out and is awaiting response from the principal of the school, superintendent and mayor as well as the Federal Agency for Toxic Substance and Disease Registry.
Caitlin O'Kane is a digital content producer covering trending stories for CBS News and its good news brand, The Uplift.
source: https://www.cbsnews.com/news/colonia-high-school-brain-tumors-al-lupiano-115-people-diagnosed-woodbridge-township-new-jersey/