The outgoing Director of Public Health says the quick sharing of scientific information and the widespread use of masks have both been critical parts of the country's public health response. 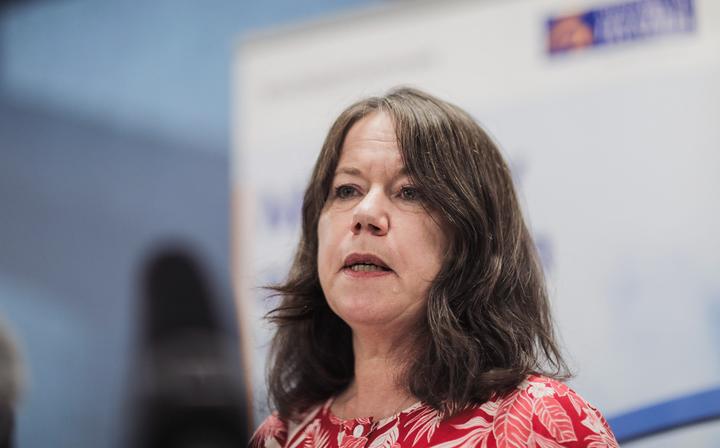 Director of Public Health Caroline McElnay is providing an update on the Covid-19 situation in the country. Photo: RNZ/Samuel Rillstone

Dr Caroline McElnay, who is leaving the role shortly, presented the regular Covid-19 update with Director-General of Health Dr Ashley Bloomfield for the final time today and gave her view on the pandemic response over the past couple of years.

She is stepping down from the role in the same week Dr Bloomfield announced he would also soon be leaving his role.

McElnay had been in the job for five years and is travelling to Europe, but plans to come back to New Zealand. She said she is looking forward to going hiking - on long walks without cell phone coverage.

McElnay said we had learned a lot since New Zealand first went into lockdown more than two years ago.

Masks had become part of our daily lives and will continue to remain an important tool, she said.

"They are a critical aspect of our public health response."

The pandemic had changed the way many people worked, and also sped up science, she said.

"Scientists effectively show progress through publishing scientific papers, which makes the information then available to the science and health communities. Pre-Covid that process often took months, but during Covid it was clear sharing information was key. Information that could help understand the science behind the pandemic and assist in tackling it needed to be fast, so it could be used equally quickly.

"Applying that knowledge, which has improved as time has gone on, has held New Zealand in good stead. Vaccines and treatments that are effective at keeping people out of hospital were developed fast and advances in tracking and testing were equally quick."

This has allowed the fast spread of information to the scientific community and the public within days.

There had been frequent changes in advice and approach as experts and officials learnt more, she said.

New Zealand was very fortunate to have had a solid foundation of trust by the public in the country's institutions, but she said she was also aware of the impact the pandemic had had on many people's lives.

She noted there has also been a rise in misinformation, so officials have worked to increase the amount of trustworthy information available to the public.

She said the media standups will continue. This was her 299th in two years, she said.

McElnay said she will travel overseas for some months. She said she was honoured to have held the role of director of public health.

"I want to finish by thanking you all, all New Zealanders, in getting us to where we are today on what has been a rollercoaster of a ride. And I'd also like to thank you in this room, the media, for your extensive coverage throughout the pandemic, helping to keep the public informed."

Dr Bloomfield said there had been speculation in the past 24 hours about the timing of his and McElnay's departures. He said Dr Jim Miller had already joined to act in the public health role while McElnay's replacement was appointed, while Bloomfield himself will remain for four months.

The response to the virus had been a huge undertaking for many people, but "having said that Dr McElnay has been instrumental, and often the public face of the ministry's response", he said.

"A mammoth effort indeed. Personally I just want to fully acknowledge Dr McElnay's calm and supportive and solution-focused approach over the last five years, but in particular she's been a real rock for me over these past two years."

McElnay said she took on the role five years ago and decided at the time that five years would be a good length of time, and it has been challenging.

She said she gets quite a few comments about her hair, and tries to avoid engaging with social media.

She personally did not feel burnt out but said burnout was a very real thing and workplaces and employees themselves needed to acknowledge that.

"Talk to your family and friends and talk to your health professionals."

A highlight of her time was seeing public health experts come together to come up with a plan back when Covid-19 first struck our shores, she said.

Seeing the advice she and her colleagues gave be announced as official decisions reinforced the weight of responsibility that came with her job. She said it was "awe inspiring".

"Every country has responded differently according to the context of that country."

It was really the early closing of the borders as an island nation that really allowed such a strong response, she said.

Bloomfield said the health system was now having to gear up to switch from responding to the acute illness from Covid-19, to a longer-term care for people who have long-term symptoms.

Pressure on the healthcare system due to Covid-19 was now easing.

The overall situation was improving, and as case numbers continue to decline it will also mean fewer staff members being off work, he said.

DHBs all have plans for how to catch up on care that has been deferred and ensure it is delivered, he said.

He was concerned enough about the possibility of a perfect storm of winter illnesses as well as Covid-19 to have prepared a plan to prevent that.

Advice on a fourth booster was going to ministers this week, he said.

"The groups that other countries are offering a fourth dose to are largely older people and immunocompromised people of all ages."

Dr Bloomfield also said he wanted to mark today as World Health Day, the anniversary of the founding of the WHO in 1948.

There have been 11,634 new community cases of Covid-19 reported today, with 13 further deaths and 639 people in hospital.