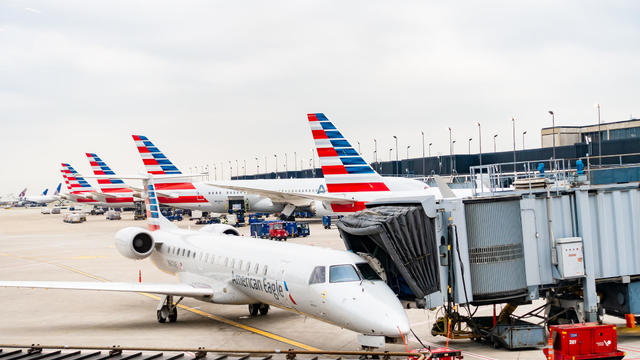 A passenger was arrested after deploying a plane's emergency slide while on the tarmac at a New York airport, American Airlines said Wednesday. Cynthia McKnight, a 24-year-old from Sacramento, California, is charged with disorderly conduct, harassment, trespass and criminal mischief, according to the Niagara Frontier Transportation Authority.
The plane, which was scheduled to travel from Buffalo Niagara International Airport to Chicago O'Hare International Airport on Tuesday evening, was forced to return to its gate shortly after push back because of a disruptive passenger. Before the plane could reach the jet bridge, McKnight allegedly opened the boarding door, deploying the emergency slide. She then used the slide to exit the airplane onto the tarmac, according to American Airlines.
"The individual was quickly apprehended by local law enforcement and has been placed on American's internal refuse list pending further investigation," the airline said in a statement Wednesday. "We thank our team members for their professionalism and their action to ensure the safety of our customers and fellow crew."
There were 65 other passengers and four crew members on board the plane at the time of the incident. No injuries were reported, according to American Airlines. Following the incident, the plane was taken out of service and all of the passengers were rebooked on alternate flights.
source: https://www.cbsnews.com/news/unruly-passenger-cynthia-mcknight-arrested-american-airlines-plane-emergency-slide/