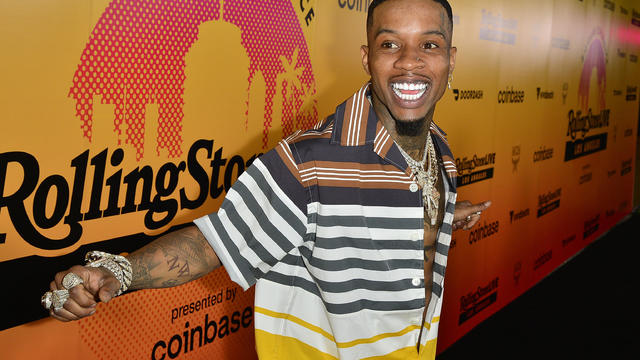 Rapper Tory Lanez, who is charged with shooting Megan Thee Stallion in the Hollywood Hills back in the summer of 2020, was taken into custody in a downtown Los Angeles courtroom Tuesday for allegedly violating the terms of a pre-trial protective order.
L.A. County Superior Court Judge David Herriford agreed with prosecutors that some of Lanez's recent social media posts appeared to be messages directed at Megan Thee Stallion. The judge ordered that Lanez no longer make any public mention of the case or the victim.
L.A. County Superior Court Judge David Herriford set bail at $350,000. Lanez's attorney said the bail would be posted shortly, so Lanez is not likely to remain in custody.
The 29-year-old Canadian rapper, whose real name is Daystar Peterson, is charged with one count each of assault with a semiautomatic firearm and carrying a loaded, unregistered firearm in a vehicle. The charges include allegations that he personally used a firearm and inflicted great bodily injury.
During a preliminary hearing last year, Los Angeles Police Department Detective Ryan Stogner testified that he spoke with Megan Thee Stallion and that she told him that she heard Lanez say, "Dance, b----," before firing at her at about 4:30 a.m. July 12, 2020, as the bikini-clad woman got out of a Cadillac SUV for the second time that morning following an argument.
"No one heard, `Dance, b----,' except for Megan?" defense attorney Shawn Holley asked on cross-examination.
"Correct," the detective responded.
The victim, identified in court and the criminal complaint only as "Megan P.," described the injuries to her feet as "bleeding profusely" and that she fell to the ground and crawled to a nearby driveway, according to the detective.
She said that a female friend of hers who had been in the vehicle ran up to her afterward, along with Lanez, and that he "emphatically apologized for what he did" and offered to drive her home. The detective said Megan Thee Stallion told police that Lanez "offered her money" and begged her not to say anything, telling her that he was on probation -- something Stogner said he could never substantiate.
The vehicle was subsequently stopped by police officers responding to a call of a shooting, and she initially told officers and doctors that she had not been shot and that broken glass had caused the injuries to her feet, according to the detective. She told the detective that she was "extremely scared and embarrassed," was "scared he was going to get in trouble" and was concerned that the police might shoot him, but was "sincere," "visibly distraught" and "crying" when she subsequently admitted that Lanez had shot her, Stogner testified.
Some of the bullet fragments were subsequently removed from the woman's feet by an orthopedic surgeon at Cedars-Sinai Medical Center, but some bullet fragments still remain inside her and she reported that she has ongoing physical therapy and difficulty walking in some types of shoes, according to the detective.
Megan Thee Stallion, who was bleeding, and Lanez were among four people in the SUV that was stopped about a mile from the scene of where shots were reported, according to LAPD Officer Sandra Cabral. A handgun that was "warm to the touch" was discovered inside the vehicle, and four spent casings were subsequently found at the scene, Cabral testified.
In a video posted on Instagram Live following the shooting, Megan Thee Stallion said, "Tory shot me. You shot me and you got your publicist and your people...lying...Stop lying."
She later wrote an op-ed in the New York Times titled, "Why I Speak Up For Black Women."
source: https://www.cbsnews.com/losangeles/news/rapper-tory-lanez-arrested-for-social-media-posts-directed-at-megan-thee-stallion/