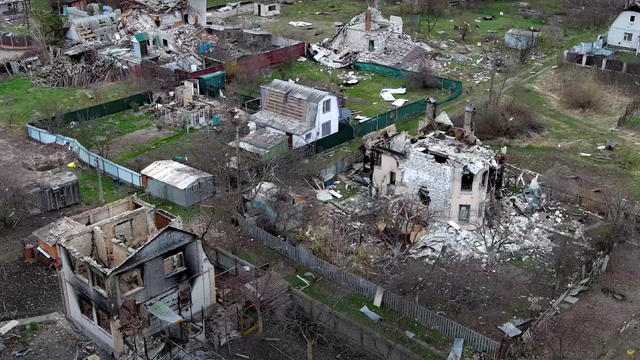 Russia's military on Friday said it wants to seize all of Donbas and southern Ukraine -- and reach far as south as Moldova -- as it outlined its objectives in "the second stage" of the attack on Ukraine. The announcement marks far wider war goals than what Moscow previously stated.
"Since the beginning of the second stage of the special operation, and it started just two days ago, one of the tasks of the Russian army has been to take full control of Donbas and southern Ukraine. That will ensure the opening of a land corridor to Crimea and influence critical elements of the Ukrainian economy," acting Central Military District Commander Rustam Minnekayev said at an annual meeting of the Union of Defense Plants of the Sverdlovsk Region on Friday.
"Establishing control over southern Ukraine would also give the Russian army access to Transdniestria, where facts of oppression of the Russian-speaking population have also been observed," Minnekayev said. Transdniestria is the de-facto breakaway region of Moldova that is not internationally recognized but has pro-Russian leaders and about 1,500 Russian troops stationed there.
The Kremlin used claims of discrimination against the Russian-speaking population to justify its invasion of Ukraine two months ago, along with accusations against Ukraine and NATO that supposedly infringed on Russia's security.
The Moldovan government has been rattled by the Russian attack on its neighbor, with Moldovans fearing that Russian President Vladimir Putin could potentially then move further West.
Moldova has accepted hundreds of thousands of Ukrainian refugees since the war broke out on February 24. Its government has condemned Russia's war and submitted a bid to join the European Union along with Georgia and Ukraine. It is also seeking the EU's support in handling the influx of refugees and calling on the bloc to step up support for the country.
But it is also trying to carefully balance its neutral stance with NATO to signal it is not willing to be the next target for Russia.
Before the Russian military retreated from the capital city Kyiv, Moscow claimed that "the first stage" of the attack had been completed, and it is now focusing efforts on the "liberation" of two regions in the east to bring them under the control of pro-Russian leaders in the so-called breakaway Donetsk and Luhansk People's Republics.
Military experts and Western officials linked the Russian retreat from Kyiv to significant losses in personnel and hardware as Ukrainian resistance appeared to have exceeded Russian expectations and toppled the initial goal of swiftly capturing the capital and claiming quick victory.
But now, Russia appears to scale up its official goals again, targeting southern Ukrainian cities, even though its previous attempts to attack them have stalled.
If Russia proceeds in this direction of attack, its primary targets would be the key port city of Odesa along nearby Mykolayiv.
The tenacity of Mykolayiv's resistance in March kept the invading force from advancing to Odesa on the ground, but Russian warships off the coast have been firing missiles into nearby towns.
source: https://www.cbsnews.com/news/russia-seeks-full-control-southern-ukraine-moldova-access-general-says/