Book excerpt: Tina Brown on the House of Windsor in "The Palace Papers" 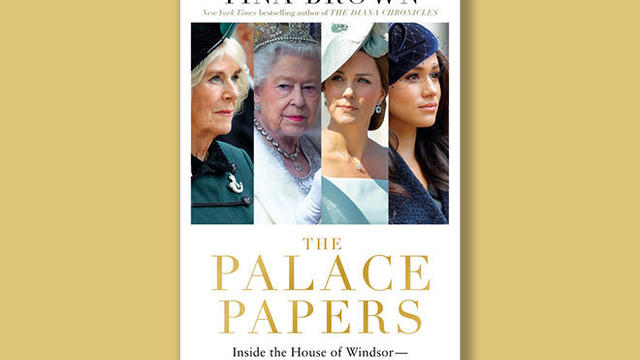 Journalist and editor Tina Brown has long chronicled Britain's royal family. In her latest book, "The Palace Papers: Inside the House of Windsor – The Truth and the Turmoil" (Crown, available April 26), Brown covers the monarchy's last quarter-century, one of the most difficult and at times scandalous periods in its history.
Read an excerpt below, and don't miss correspondent Mo Rocca's interview with Tina Brown on "CBS Sunday Morning" April 24!
Flashman's Flameout: Harry Confronts His Demons
With William on a clear path to kingship and his grandmother approaching ninety years of age, Palace advisers deemed there would be plenty for Harry to do, representing the Queen on foreign tours and partnering with his brother on their Royal Foundation. Yet Harry was lost without the army's sense of purpose. Civilian life forced him to contend with the reality of his declining position in the line of succession. He only had to observe his Uncle Andrew's flailing for relevance and income to see the mirror of his own impending fate. The cruelty of primogeniture was more personal in Harry's case.
The bond between Charles and Andrew, separated by a twelve-­year age gap, had never been tight. With only two years between William and Harry, the inevitability of Harry being pushed aside gave rise to a sorrowful tension that was more like that between Elizabeth and Margaret in their younger years. As "the boys," they had been indivisible, and the public had loved their double act. Their mother even dressed them alike when they were young. But their identical treatment had set up unrealistic expectations. The boys were not, and could never be, equal.
Just as Harry was missing the fraternal ties with his army chums, he also mourned his us­-against-­the-­world bond with William. Though still close, their relationship hadn't been the same since William married Kate. In May 2015, the Cambridges produced a second child, Princess Charlotte, and Kate made no secret about wanting more. Harry felt displaced by their bougie family unit, and felt more and more like a Royal Bridget Jones.
In the family tussle between the claims of a brother and loyalty to a wife, it was clear who would win. The Cambridges had become a tight unit, and William a full-­on Windsor country bumpkin. On weekends when he wasn't chez Middleton, he was tramping the grounds of Anmer Hall, the redbrick Georgian mansion on the Sandringham Estate that the Queen gave the Cambridges as a wedding present, wearing a flat cap and tweed jacket like his "turnip toff " Norfolk farmer friends.
For his part, William felt that Harry's unabated bro behavior was getting old. He was less amused than the British public by either the debacle when Harry was snapped playing strip billiards in Las Vegas or his ceaseless boozy nightclub forays with his rowdy friends. Irritatingly, the British public adored Harry for his antics. He was a bloke like them on a bender, not some stodgy Goody Two-­shoes like his princely brother. Everyone, including the Queen, forgave Diana's naughty boy. Bookings to Vegas shot up after the free publicity.
Harry's recklessness exasperated William. His younger brother was always complaining about the invasion of the press, but at the Vegas hotel he was so wasted on Grey Goose he had got naked with a group of women he had picked up in a hotel bar – unvetted by his protection officers – one of whom was bound to (and did) sell a cell phone picture to the celebrity scandal site TMZ. What was he f***g thinking?
Excerpted from "The Palace Papers" by Tina Brown. Copyright © 2022 by Tina Brown. Published by Crown, an imprint of Random House, a division of Penguin Random House LLC.
For more info:
source: https://www.cbsnews.com/news/book-excerpt-tina-brown-the-palace-papers-british-royal-family/