The mystery of a blue 2018 Suzuki Swift car apparently abandoned at the New Plymouth Airport carpark for two years has been resolved.

Parked up as people and planes come and go, but the tidy little car has been a constant during the pandemic with no one returning to collect it.

New Plymouth Airport chief executive David Scott told Lisa Owen the airport knew who the owner was from car registration information some time ago, but could not find them, he said.

"[People are welcome to] come and park in our lovely car park, but obviously when a car is sitting there too long it does obviously become a bit cost prohibitive for people." 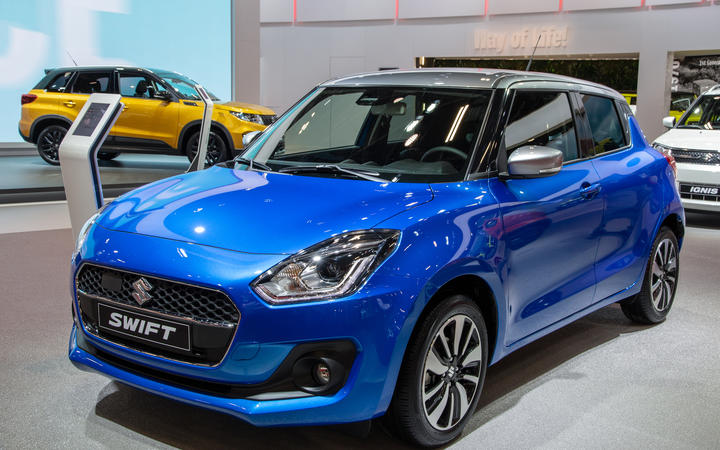 The blue Suzuki Swift similar to this one has been sitting in the airport parking lot for two years. Photo: 123rf

It is not unheard of for cars to be parked and abandoned, Scott said. Once a warrant of fitness has expired, that's a good sign the owners have left it, he said.

Advertisements were placed in local newspapers to try and find the owner.

"We were unable to locate the individual - they'd literally disappeared in thin air."

Checkpoint contacted a finance company that had interest in the vehicle, and the company then contacted the airport.

"We have received news today from a finance company who recognised the number plate and realised they had a claim on the vehicle."

It has now been towed and is in the possession from the finance company, he said. Police were involved at first in case the car was involved in foul play or stolen. 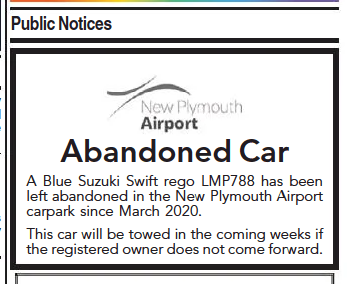 "It just seemed like a case of pure abandonment," Scott said.

"This happens all over the world that people abandon their cars when times get tough at the airport and I guess that it's just trickled all the way down to the 'Naki."

The parking fees over two years would have amounted to more than $9000, Scott said, but he admits the carpark hasn't been terribly busy during lockdowns and travel restrictions.

"The reality is for us the carpark hasn't been exactly jammed for the past two years."