Person sets themself on fire in front of the Supreme Court 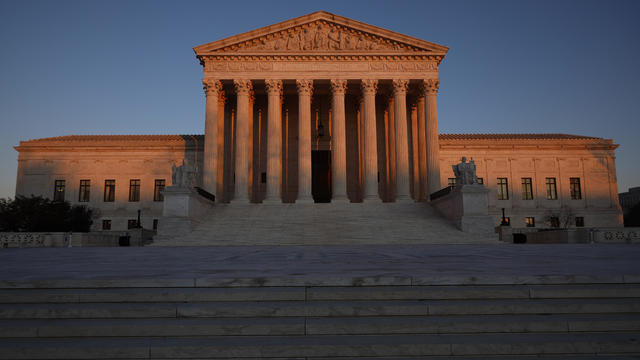 A person set themself on fire in front of the Supreme Court in Washington, D.C., on Friday night, the court confirmed to CBS News in a statement. The court said there were no other injuries, and there does not appear to be a public safety concern.
The court said the incident occurred at approximately 6:30 p.m., when a person went on to the plaza in front of the court building and set themself on fire. The court did not offer any specifics on the person or what their motivation may have been.
Supreme Court Police, U.S. Capitol Police and the Metropolitan Police Department responded to the incident, the court said, and a medical helicopter airlifted the person to a local hospital. The court did not provide any information about their current condition.
"The area remains closed for further investigation, but this is not a public safety issue," the court said.
The incident comes amid a chaotic day in Washington D.C., where the Supreme Court is located. Earlier Friday, multiple people were shot on a busy street in Washington, D.C. Police have identified a person of interest in the case, but have not named or apprehended a suspect.
If you or someone you know is in emotional distress or suicidal crisis, call the National Suicide Prevention Hotline at 1-800-273-TALK (8255). For more information about mental health care resources and support, The National Alliance on Mental Illness (NAMI) HelpLine can be reached Monday through Friday, 10 a.m.–6 p.m. ET, at 1-800-950-NAMI (6264) or email [email protected]
Victoria Albert is a Sr. News Editor at CBS News. Reach her at [email protected]
source: https://www.cbsnews.com/news/supreme-court-person-sets-themselves-on-fire/