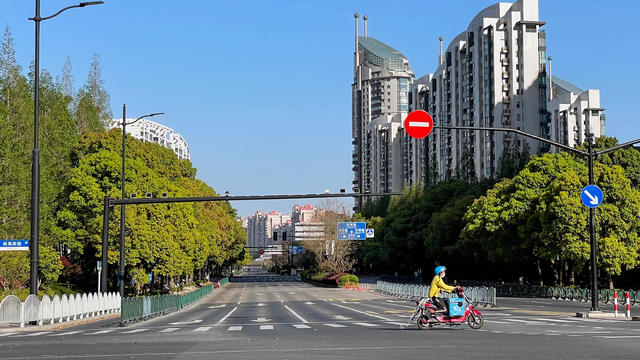 China's largest city remains under a strict COVID-19 lockdown, forcing more than 25 million residents to stay indoors. More than two weeks after Shanghai was first shut down, anger is boiling over.
At night, between the high rises, a drone warns people to follow COVID rules and, somewhat bizarrely, not to sing on their balconies.
During the day, there's a frantic push by the government to get food to millions shut into their homes, but the food hasn't reached everyone.
Social media posts showed protests breaking out in some neighborhoods. In one, the crowd shouts, "We're starving."
A man was filmed last week venting his fury on the phone. "What am I supposed to buy?" he shouted. "What do I eat? You're driving us to our deaths."
Construction crews have converted Shanghai's convention center into a vast isolation center for 50,000 beds. Anyone who tests positive for COVID has no choice — they have to board a special bus that takes them to a government facility, where they must stay until they test conclusively negative.
The government announced it has plans to ease restrictions in some areas where the outbreak is under control, but hasn't named them or said when the easing will begin.
There's also been economic fallout from China's biggest lockdown yet — trucks aren't moving and shipping in Shanghai's busy port has shrunk. That will drive prices up everywhere, including in the U.S., and add even more pressure to the world's fraying supply lines.
Elizabeth Palmer has been a CBS News correspondent since August 2000. She has been based in London since late 2003, after having been based in Moscow (2000-03). Palmer reports primarily for the "CBS Evening News."
source: https://www.cbsnews.com/news/shanghai-covid-lockdown/