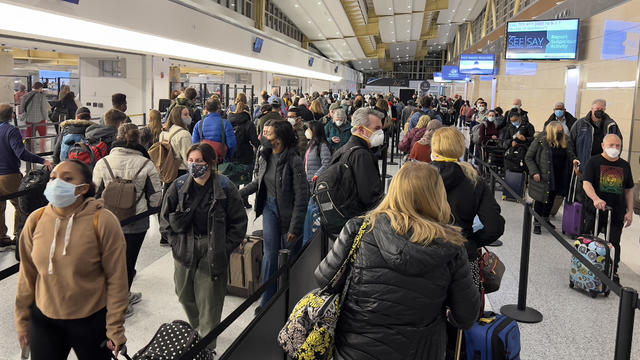 Millions of air travelers are taking to the skies for Easter weekend. Despite domestic ticket costs jumping 40% since January, according to Hopper, the increase in airfare hasn't softened demand.
Domestic air ticket costs are expected to increase another 10% by June, according to Hopper.
Delta Air Lines booked more tickets than it ever had in the last month, and will fly more than 480,000 passengers per day through Sunday. United Airlines will carry more than 400,000 passengers per day through Monday.
But staff shortages left over from the height of the pandemic are leaving pilots and flight attendants frustrated. Spirit Airlines staff protested Friday in Las Vegas.
Southwest Airlines Pilots Association is warning fatigue has become its "No.1 safety threat," while Alaska Airlines pilots have been protesting for weeks over their workloads. The airline responded by cutting its schedule through June.
"We're going to be in for some really tough three or four months coming up because I don't see any short-term solutions to try to satisfy the demand when you don't have the staff to support it," CBS News senior travel adviser Peter Greenberg said. "The airlines were over scheduled, they still are. And the problem with that is everything goes nuts because if you throw in a weather issue or a maintenance issue, the system collapses."
Meanwhile, there's a bit of relief for road travelers, with the national average for gas prices dropping to $4.07, according to AAA. That's $0.24 cheaper than last month, though still at historically high levels.
Errol Barnett is a transportation correspondent for CBS News based in New York.
source: https://www.cbsnews.com/news/air-travel-easter-staffing-shortages/