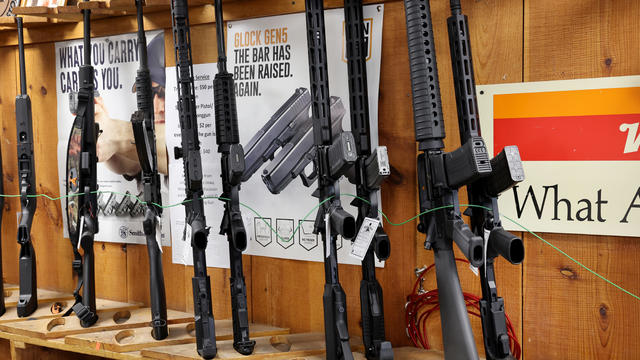 Legal battles against a new Illinois assault weapons ban are mounting. Since Jan. 10, when Gov. J.B. Pritzker signed the "Protect Illinois Communities Act" legislation — which bans the sale and distribution of assault weapons in Illinois — the new law has been hit with a barrage of legal claims.
CBS News Chicago reported Wednesday that one such lawsuit represents hundreds of plaintiffs from 87 counties. The case's attorney, Thomas DeVore, a former Republican candidate for Illinois attorney general, argues the ban violates the equal protection clause of the constitution, and claims the legislative process used to pass the ban was flawed.
Another was added to the mix Tuesday when a coalition of four gun rights groups, including the Illinois State Rifle Association, filed a federal lawsuit alleging the ban infringes on the rights of law-abiding citizens, court documents say.
"The 2nd Amendment is fundamentally about self-defense, and the 14th Amendment is about not having our rights infringed. This new law makes criminals out of law-abiding citizens" said Richard Pearson, executive director of the Illinois State Rifle Association,  in a statement.
CBS Chicago reported a third lawsuit was filed in Crawford County last Friday.
In addition to banning the sale of assault weapons, the legislation caps sales of high-capacity ammunition magazines, and "switches," extra pieces that convert handguns into assault weapons. Those who already own weapons on the banned list can keep them, but are required to register them within 300 days, the legislation says.
The new ban had been debated for years, but it found renewed support following the July 4 Highland Park parade shooting in which seven people were killed and dozens more wounded.
While attending the World Economic Forum in Switzerland, Pritzker said he is confident state and federal courts will uphold the bans.
However, sheriffs in several Illinois counties — including McHenry, Kankakee, and DuPage — have already said they will not enforce it, CBS Chicago reported.
source: https://www.cbsnews.com/news/illinois-assault-weapons-ban-legal-battles-lawsuits/