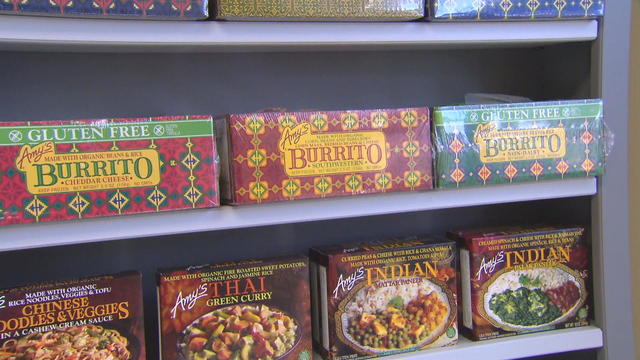 Amy's Kitchen built its brand as a purveyor of organic, wholesome prepared foods by preaching "goodness." Now the company is coming under fire after workers at one of its plants accused the company of mistreatment, including inadequate breaks, a lack of drinking water and managers stopping people from using the bathroom.
Amy's Kitchen co-founder Andy Berliner denied the allegations in an Instagram post in March, noting that the company provides multiple water stations in the plant and scheduled bathroom breaks, as well as allowing workers to take breaks when they need them. But the allegations have led some grocery stores to drop the brand, such as Oakland, California-based Mandela Grocery, while some consumers also vow to boycott it.
The allegations were detailed in a complaint addressed to the California Occupational Safety and Health Administration (Cal/OSHA) and shared with CBS MoneyWatch by a union working with Amy's Kitchen workers.
In a statement to CBS MoneyWatch, Amy's Kitchen said the complaint "is filled with untruths." It also said that Cal/OSHA told the company it was unaware that a complaint had been filed against Amy's Kitchen. Cal/OSHA didn't immediately return a request for comment.
The backlash facing Amy's Kitchen comes as more U.S. workers push for better treatment, benefits and pay. But it may strike some as incongruous that a brand known for making organic bean burritos and gluten-free macaroni and cheese — as well as for its commitments to using non-GMO ingredients and providing on-site employee health centers — would be accused of mistreating its employees.
"It is not uncommon for workers to experience chronic back pain and injuries, lost limbs and other chronic injuries as a result of the unsafe working conditions," the complaint alleged. "Workers are frequently sent to the onsite clinic after serious injuries, only to be told to return back to work without ample recovery time."
"Without immediate action, workers will continue to get injured and/or possibly killed," the complaint stated.
The complaint was written by Tony Delorio, principal officer at Teamsters Local Union No. 665, on behalf of Amy's Kitchen worker Cecilia Luna, who is employed at the company's Santa Rosa, California, plant. Delorio mentioned in the document that the workers are non-unionized but that there is an "active organizing campaign" with Teamsters Local 665.
"I have told every one of our employees who has asked that unionization is their choice — whether yes or no," he wrote in the Instagram post. "And what was resoundingly clear is that our employees are not asking for boycotts and in fact are saddened and scared by this negative campaign led by a union."
The complaint alleges that Amy's Kitchen workers are pushed to work at speeds that can lead to injury, with expectations that workers in the burrito line roll 10 to 12 burritos per minute. It also alleges that because of understaffing, workers who normally assemble 66 plates per minute now are sometimes expected to assemble up to 72 plates per minute.
"Despite fast pace and high quotas, workers are not given adequate breaks or opportunities to change tasks within the lines to avoid repetitive motion injuries," the complaint claims. "Workers are often not allowed to use the restroom; managers claim line speeds would be impacted when someone needs to step away to use the bathroom."
Amy's Kitchen senior director of sustainability, Paul Schiefer, said in the company's statement that its Santa Rosa facility, which employs about 500 workers, "recently recorded a safety record that is two times better than the industry average."
Schiefer added that Amy's Kitchen is aware of interest from unions to organize the plant, but that the company prefers "to maintain a direct relationship with our employees — many of whom have worked at Amy's for more than two decades."
In the meantime, some customers are vowing to boycott the brand, at least until the issue is resolved.
"We love your products but until you can give your employees safe working conditions we will be boycotting and I will be sharing this with family and friends," one consumer wrote in response to Berliner's Instagram post. "What a disappointment."
source: https://www.cbsnews.com/news/amys-kitchen-boycott-worker-allegations-osha-complaint/