Labor leader Anthony Albanese will be forced to isolate at home for the next week of the election campaign after testing positive for Covid-19, driving changes to his strategy as he draws on a contingency plan. 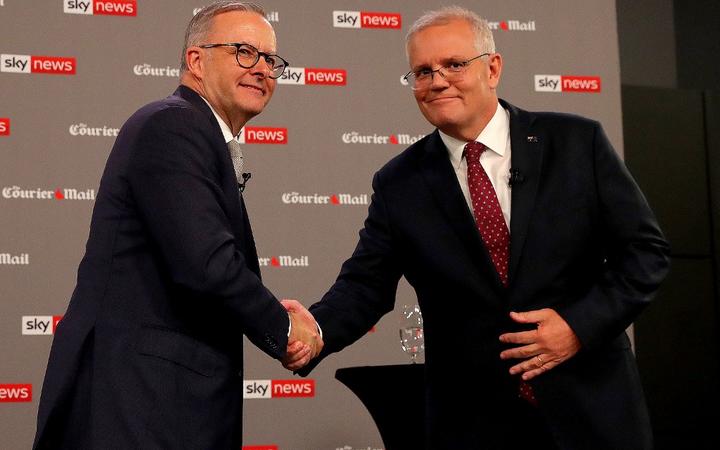 Australian Prime Minister Scott Morrison (R) shakes hands with leader of the opposition, Anthony Albanese, during the first leaders' debate of the 2022 federal election campaign at the Gabba in Brisbane on April 20, 2022. Photo: AFP

Albanese said he would continue campaigning from home in Sydney for the next week while he recovers from the virus.

The Labor leader spent Thursday campaigning on the defensive in the marginal seat of Gilmore, on the NSW south coast, after taking part in a leaders' debate in Brisbane last night.

He has been taking PCR tests regularly and unlike Prime Minister Scott Morrison, has not had Covid-19 before.

It means the Opposition Leader will be forced to postpone a punishing schedule of marginal seat visits in the next week and instead do media appearances from home, while the Prime Minister continues to travel around the nation.

"Following a routine PCR test this afternoon ahead of interstate travel to Western Australia, I have returned a positive result for Covid this evening," Albanese said in a statement on Thursday night.

"While at home, I will continue my responsibilities as alternative Prime Minister and will be fighting for a better future for all Australians.

"I am grateful to know that I will have access to the world's best health care if I need it, because of Medicare.

"I am feeling fine so far - and thank everyone for their well wishes."

"Everyone's experience with Covid is different and as Labor's campaign continues, I hope he does not experience any serious symptoms," Morrison said on Twitter.

Several opposition MPs told the ABC that while the situation was not ideal, they did not believe it would have a detrimental impact on the Labor campaign.

They all noted it was fortunate Albanese had tested positive less than two weeks into the campaign, rather than the week before the election.

Labor strategists have been wargaming different strategies in the event of a potential Covid-19 infection, and some MPs suggested it might even be a "blessing in disguise" after a shaky start to Albanese's campaign.

Publicly, Labor MPs sent well wishes to their leader on social media, with Labor frontbencher Chris Bowen - who has also had Covid - telling him to "rest up" as "there is much work to do when you're out of isolation to win this election."

Uniting's Head of Village Services Keith Morgan told the ABC they have been made aware of the situation.

"Following Mr Albanese's positive Covid-19 test result, staff and residents at Uniting's Symons House in Nowra will take precautions which include testing, cleaning and monitoring for symptoms," he said.

"Uniting ensures 100 per cent of our staff and contractors are full vaccinated against Covid-19."

There are still four weeks left of the election campaign to go, with voters heading to the polls on 21 May.