Sri Lanka's beleaguered president will not be resigning, his government's whip has told parliament. 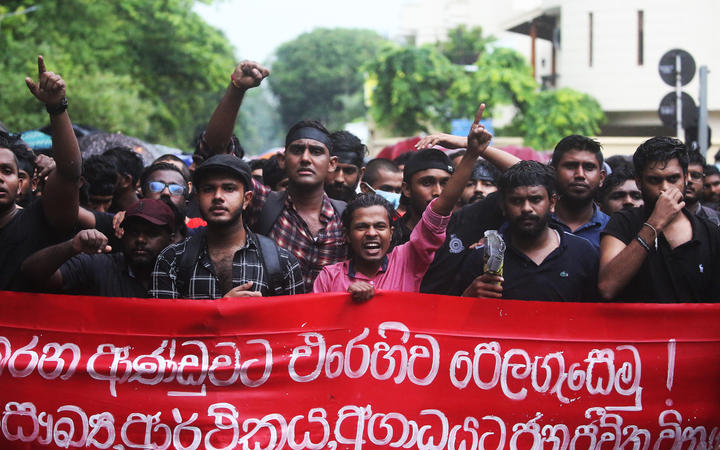 University students protest against the economic crisis on April 5, 2022, in front of the residence of the Prime Minister of Sri Lanka Mahinda Rajapaksa in Colombo. Photo: AFP

The declaration defies calls from the public and political opponents for Gotabaya Rajapaksa to step down amid the country's economic crisis.

Crowds have protested for weeks over lengthy power cuts and shortages of gas, food and other basic goods.

The public anger has prompted nearly all Cabinet ministers to quit, and scores of MPs to leave his government.

Opposition MPs have also rejected his invite to form a national unity government, saying voters want the president and entire government to resign.

But on Wednesday, Chief Government Whip Johnston Fernando told lawmakers: "As a responsible government, we state President Gotabaya Rajapaksa will not resign from his post under any circumstances."

On Tuesday night, Rajapaksa lifted controversial state of emergency measures following further protests, the departure of several government lawmakers and the resignation of his finance minister.

The president had invoked the law - which allows the arrest of suspects without warrants - on 1 April after protests outside his house.

But he lifted them on Tuesday in an apparent concession to angry citizens. Earlier that day in parliament, 41 MPs had left the president's ruling coalition to "represent themselves independently". The implication of this is still unclear.

Sri Lanka is facing its worst economic crisis since gaining independence from the UK in 1948.

The heavily import-reliant South Asian nation no longer has enough dollar reserves to buy essential items like food, fuel to power vehicles or even generate electricity.

People have been suffering power cuts of up to 13 hours, massive inflation and a shortage of food and basic goods.

Protests across the country continued on Wednesday. Public frustration over the crisis has seen peaceful demonstrations held since January.

But the situation has escalated in the last fortnight, with many more people taking to the streets as power cuts stretched to 13 hours and petrol stations ran out of fuel.

"People can't afford their daily rice, their dhal, their basic necessities. People can't get on buses to come to work, to go to school," one protester told the BBC this week.

While most protests are peaceful, there have also been violent flare-ups - with attacks on politicians' homes and clashes between protesters and police.

On Tuesday, the UN Human Rights Council expressed its concerns about the emergency measures in a statement issued before they were lifted.

The UN noted the reports of police violence and said it was worried the restrictions aimed at "preventing or discouraging people from legitimately expressing their grievances through public protests".

It added that: "The drift towards militarisation and the weakening of institutional checks and balances in Sri Lanka have affected the state's ability to effectively tackle the economic crisis."