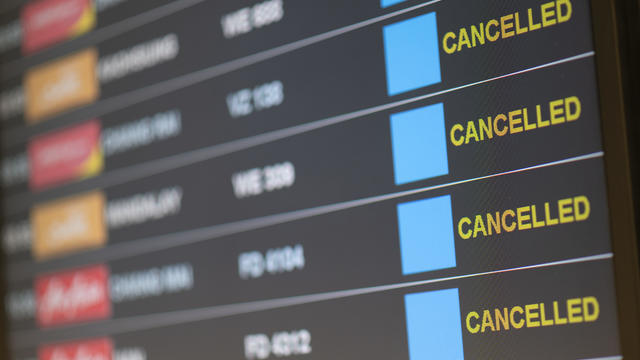 Overseas airlines are having to cancel hundreds of flights as they grapple with coronavirus-related staffing shortages weeks after they ditched rules requiring passengers and staff to mask up in the air.
The disruptions also come as the CEOs of leading U.S. airlines urge the Biden administration to roll back a federal rule requiring that masks be worn in the sky.
Masks have not been required on flights operated by budget-friendly, Swiss airline EasyJet since March 27, the airline said in a statement. The move came after the UK removed all travel restrictions earlier in March.
"This welcome move by the UK Government marks a return to truly restriction-free flying to and from the UK, giving an extra boost to travel this Easter. We are looking ahead to what we expect to be a strong summer for EasyJet, with plans to return to near 2019 levels of flying. We can't wait to welcome more customers back on board," EasyJet CEO Johan Lundgren said in a statement at the time.
Between March 28 and April 3, EasyJet cancelled 202 of its 3,517 flights scheduled to depart from the UK, according to data provided to CBS MoneyWatch from Cirium, an aviation analytics company. By comparison, the carrier cancelled zero flights departing from the UK during the same period in 2019, before the pandemic.
An EasyJet spokesperson attributed the increase in cancelled flights to "higher than usual staff sickness levels" due to a recent surge in COVID-19 cases across Europe.
"As a result, we have made pre-emptive cancellations so customers can be notified in advance of travel and are able to move easily onto alternative flights," the spokesperson said in a statement to CBS MoneyWatch.
According to Dr. Eric Feigl-Ding, an epidemiologist and health economist at Harvard Chan School of Public Health, such flight cancellations were all but guaranteed once passengers and crew members took off their masks.
"So damn predictable — UK govt drops restrictions, airlines like @easyJet drops masks ... and less than 2 weeks later ... huge spike in pilots and flight attendants out sick with #COVID19 unable to work, and 120 flights cancelled! Airline CEOs asked for this," he said on Twitter.
SO DAMN PREDICTABLE—UK 🇬🇧 govt drops restrictions, airlines like @easyJet drops masks… and less than 2 weeks later… huge spike in pilots and flight attendants out sick with #COVID19 unable to work, and 120 flights cancelled! Airline CEOs asked for this. https://t.co/zVOc2g2KzS pic.twitter.com/YWD7XIOodl
A similar move by U.S. airlines "would backfire in many ways," Feigl-Ding told CBS MoneyWatch. He thinks more passengers would hesitate to fly if airlines ditch mask rules. "If there are no masks, that actually makes people more worried about taking the trip. It might make more people stay home and bite the airlines," he said.
United Airlines — which scrapped hundreds of flights in December due to an overwhelming number of crew members contracting COVID-19 during a holiday surge of the Omicron variant — said it is not currently experiencing any disruptions related to crew members being infected with COVID-19.
Still, airlines in the U.S. are bracing for the same surge in COVID-19 cases that Europe is experiencing and could see major schedule disruptions if the virus wipes out significant numbers of crew members in the coming weeks.
"There is risk we may see some of that in North America and it's all dependent on case rates," said Rob Morris, head of Ascend by Cirium, an airline analytics and consulting agency. "But it will be relatively short-term because airlines will adjust their capacity to manage demand and protect their network integrity."
Although staffing shortages related to rising COVID-19 rates in Europe are disrupting other sectors, they're particularly acute in the airline industry.
"It's very clear that the airline industry is particularly vulnerable, and this creates a cascading effect on society more than, say, a restaurant closing would," Feigl-Ding said. "This is critical infrastructure and these are essential employees, and we're endangering our economy. Stopping COVID is good for our economy, 'letting it rip' is the exact opposite."
Other airlines that have dropped mask rules are also cancelling more flights than usual. On flights operated by London, England-based airline British Airways, masks have been optional for staff and passengers since March 16. The airline made the announcement on Twitter by sharing a video of a flight attendant enthusiastically tearing off a surgical mask.
Between March 28 and April 3, British Airways cancelled 393 of 2,405 flights scheduled to depart from the UK, according to Cirium.
From 16 March, our face mask policy is changing.
Where we’re clear the destination you’re travelling to doesn’t require a face mask on board, it will become optional 😷 ✈️
Please continue to respect fellow passengers' mask preferences in these instances.#BritishAirways pic.twitter.com/vgh5ws7DfO
A British Airways spokesperson said that only a small share of its recently cancelled flights were scrapped because of COVID-19. The spokesperson said the airline on Tuesday cancelled three flights at the last minute due to personnel testing positive for the disease, adding that some of the cancellations stemmed from issues related to rebuilding "operations while managing the continuing impact of COVID."
"So while the vast majority of our flights continue to operate as planned, as a precaution we've slightly reduced our schedule between now and the end of May as we ramp back up," the spokesperson said.
source: https://www.cbsnews.com/news/flights-canceled-covid-mask-rules-dropped-airlines/