Why an NFT auction of the first tweet flopped so terribly 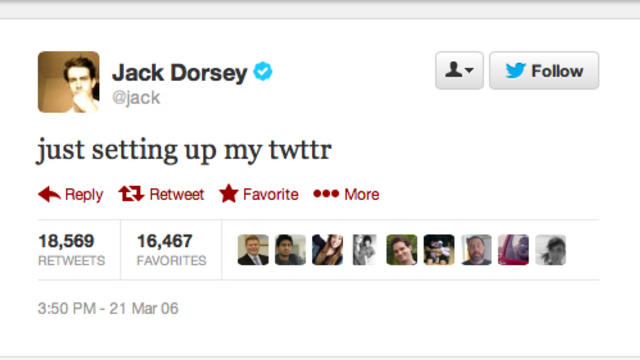 Sina Estavi garnered international attention last March when he bought a nonfungible token of the first-ever Tweet. He paid almost $3 million for the NFT, held it for more than a year, then placed it for sale on a popular NFT auction site earlier this month.
Estavi started the bidding on OpenSea at $48 million, but after nine days, no bid has reached even a fraction of that figure. The highest bid as of Friday was 4.2 ether, or roughly $12,600.
The auction's flop is a sign the NFT market is starting to cool off, one blockchain expert told CBS MoneyWatch.
Estavi said on Twitter that he wanted to donate the proceeds from his NFT sale to a charity. Now, given the poor auction results, Estavi is reportedly unsure of his next move. Estavi didn't respond to requests for comment from CBS News.
"My offer to sell was high and not everyone could afford it," Estavi told Reuters on Thursday, when the highest bid was worth $280. "It's important to me who wants to buy it, I will not sell this NFT to anyone because I do not think everyone deserves this NFT."
I decided to sell this NFT ( the world's first ever tweet ) and donate 50% of the proceeds ( $25 million or more ) to the charity @GiveDirectly ‌‌‌‌‌‌🖇 https://t.co/cnv5rtAEBQ pic.twitter.com/yiaZjJt1p0
Estavi is a cryptocurrency investor based in the Middle East and the CEO of blockchain company Bridge Oracle. Before Bridge Oracle, Estavi created a crypto exchange platform called CryptoLand that garnered funding from several early investors. Estavi was arrested in Iran last year, charged with "disrupting the economic system" and forced to close CryptoLand, according to Iranian authorities.
Estavi was released from custody the day his NFT auction closed, CoinDesk reported.
Estavi's arrest certainly played a role in the auction results, said Merav Ozair, a blockchain expert and financial technology professor at Rutger's University. Some people in the crypto world view Estavi as a semi-criminal because he's now looking for money to repay the investors of CryptoLand, Ozair said.
An NFT gives someone proof of ownership over a unique code linked to piece of digital art, a digital coupon or maybe a video clip, something that a buyer can't actually hold in their hand. NFTs can be transferred or sold, but not copied or divided into smaller parts.
Another reason Estavi's NFT didn't garner high bids is because the tweet itself is still on Twitter, Ozair noted. Former CEO Jack Dorsey, who made the post in 2006, is the only one who can take it down. As long as tweet is still up, Estavi's NFT doesn't have the rarity value it needs to fetch a high price, Ozair said.
"Jack Dorsey is not really being transparent enough about what rights he's giving up for the tweet," she said.
NFTs have actually been around since 2014, but their popularity exploded in the last two years, marked by some eye-popping buys. Artist Mike Winkelmann, who goes by Beeple, sold an NFT for $69 million last June. National Security Agency whistleblower Edward Snowden sold an NFT for roughly $5.4 million last April.
The demand and hype surrounding NFTs has started to cool down in recent months, Ozair said, in part because crypto enthusiasts have redirected their attention to the metaverse.
Sales data support the story of a slowing market. NFT sales totaled about $25 billion globally in 2021, a huge drop from the 2020 figure of $95 billion, according to sales tracker DappRadar. OpenSea, one of the world's largest NFT marketplaces, reported that the number of NFT sales on the platform peaked in August 2021, then started to trail off at the end of the year.
The first half of 2022 is also showing signs of weaker demand. The average sale price of a NFT was around $1,000 in mid-April, down from $6,800 at the beginning of the year, according to data from NonFungible.
Khristopher J. Brooks is a reporter for CBS MoneyWatch covering business, consumer and financial stories that range from economic inequality and housing issues to bankruptcies and the business of sports.
source: https://www.cbsnews.com/news/nft-auction-first-tweet-sina-estavi/