What we know about the Monterey Park shooting victims 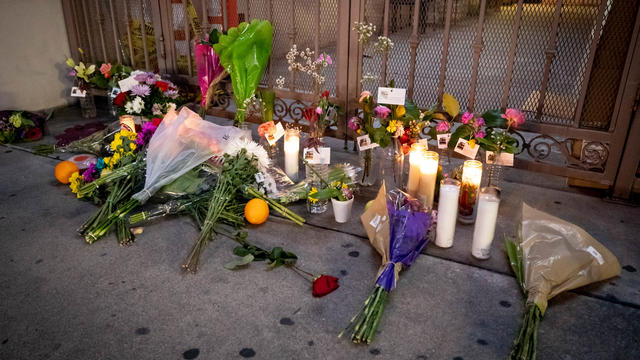 At least 11 people were killed and nine others were injured in a mass shooting that shook the city of Monterey Park, near Los Angeles, over the weekend.
The attack took place Saturday night inside a dance studio, where an event was being held to celebrate the Lunar New Year. Police said officers were dispatched to the scene after receiving a call that reported shots fired at the Star Ballroom Dance Studio at around 10 p.m. PT.  Los Angeles County Sheriff Robert Luna said at a Sunday news conference that those killed included five women and five men; the eleventh victim, described by the Los Angeles County coroner as a woman in her 70s, died at a hospital on Monday.
The names of four of the victims, three women and one man, were confirmed Monday by the Los Angeles County Medical Examiner's Office. They were identified as My Nhan, 65; Lilan Li, 63; Xiujuan Yu, 57; and Valentino Alvero, 68.
Alvero was a U.S. citizen of Filipino descent, the Philippine Consulate General in Los Angeles said in a statement.
Two of the other women killed were also in their 60s and one was in her 50s, while the men were in their 60s and 70s, the medical examiner said. Witnesses have said one of those killed was the owner of the Star Ballroom Dance Studio, CBS Los Angeles reported.
Jennifer Liu told CBS News that both of her parents, Nancy and Jeff Liu, were among the victims of the shooting. She said on Twitter that her parents had been "separated in the panic." Nancy Liu, 62, was shot and killed, while Jeff Liu was wounded and taken to the hospital, but he has since been discharged, she said.
Four of the wounded victims had been taken to Los Angeles County+USC Medical Center, the hospital said. One of those patients later died. A 73-year-old female was discharged Monday afternoon, the medical center said. One victim remained in serious condition as of Monday morning while the other was "recovering," the hospital said.
After the gunman left the scene, the authorities said he drove to another venue called the Lai Lai Ballroom in the city of Alhambra, which is located just a few miles from Monterey Park. Authorities said the suspect entered the Alhambra dance studio with a semiautomatic firearm about 20 or 30 minutes after the shooting in Monterey Park, but a man identified as Brandon Tsay wrestled the gun from him.
The suspected gunman was found dead Sunday of a self-inflicted gunshot wound in a white van that officials said he had used to leave the scene.
source: https://www.cbsnews.com/news/monterey-park-shooting-victims-identified/