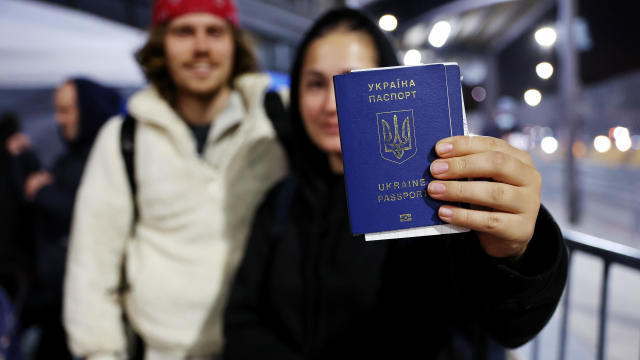 The Biden administration is launching a program that will allow U.S. citizens and groups to financially sponsor Ukrainians displaced by the Russian invasion of their country so that they can come to the U.S. sooner, the Department of Homeland Security (DHS) announced Thursday.
Ukrainians who are selected to travel to the U.S. under the initiative will be granted humanitarian parole, allowing them to bypass the visa and refugee programs, which typically take years to complete. While it does not offer permanent status, parole would allow Ukrainians to live and work in the U.S. for two years.
The sponsorship program, dubbed "Uniting for Ukraine" and set to launch on April 25, is the first concrete U.S. policy aimed at fulfilling President Biden's pledge of welcoming up to 100,000 of the 5 million Ukrainians who have fled their homeland as part of the largest refugee crisis since World War II.
The policy, administration officials said, is also designed to discourage Ukrainians from traveling to Mexico to seek entry along the U.S. southern border, where U.S. Customs and Border Protection (CBP) processed a record 3,274 Ukrainians in March alone, a jump of more than 1,100% from February.
U.S. immigration officials have processed nearly 15,000 undocumented Ukrainians in the past three months, most of them along the Mexican border, a senior DHS official said during a call with reporters Thursday.
In early March, U.S. officials at border crossings were directed to consider admitting Ukrainians under humanitarian exemptions to the Title 42 pandemic restrictions. But administration officials said on Thursday that U.S. border authorities will no longer process Ukrainians who lack travel documents on April 25.
Starting then, the senior DHS official said, "we will apply Title 42 equally to all nationalities at the border," referring to the migrant expulsion policy that is set to expire on May 23.
"Ukrainian nationals who present and do not have a visa or have not gone through the 'Uniting for Ukraine' program will no longer be paroled, unless they have some other factor that would lead a border official, a CBP officer, to make a case-by-case determination that do they merit a humanitarian exception for Title 42," the senior DHS official added.
Once the sponsorship program opens for applications later this month, U.S. individuals or organizations seeking to sponsor Ukrainians overseas will need to file affidavits of financial support and undergo background checks. DHS will then determine whether they qualify to be sponsors.
In order to be granted permission to travel to the U.S., Ukrainians will need to be first identified by their prospective sponsors, as they will not be able to apply for the program directly, administration officials said. Ukrainians will be eligible for the sponsorship initiative if they had resided in Ukraine as of February 11.
If the sponsorship is approved, the Ukrainians identified by U.S. sponsors will need to undergo security screenings overseas to ensure they will not pose a security or public safety risk to the U.S. They will also be required to be vaccinated against communicable diseases.
The initiative sponsorship announced Thursday could benefit thousands of displaced Ukrainians with U.S. ties who, until now, have faced limited options to come to the U.S. directly. An administration official said the U.S. expects the "majority" of Ukrainians welcomed by the U.S. to arrive through the new program.
U.S. visa applicants face lengthy wait times due to massive application backlogs worsened by the pandemic, and many Ukrainians may not qualify for visas. Meanwhile, the U.S. refugee process, which was crippled by COVID-19, takes between 18 to 24 months to complete for the select few allowed to enter the pipeline.
The administration on Thursday also announced an effort to refer more Ukrainians to the U.S. refugee program, focusing on identifying vulnerable displaced individuals in eastern Europe, including women, children, the elderly, people with severe medical conditions and members of the LGBTQ community.
The State Department, a senior administration official said, is also working to track down 18,000 Ukrainians who had entered the U.S. refugee pipeline before the Russian invasion under the so-called Lautenberg program, which allows religious minorities in former Soviet republics to obtain expedited U.S. resettlement.
U.S. refugee resettlement staff who relocated to Moldova after their Kyiv post was closed due to the war have identified "a number" of Ukrainians in eastern Europe who have pending Lautenberg program cases, the official said.
Administration officials said U.S. embassies and consulates are also working to increase appointments for Ukrainians seeking temporary U.S. visas and to expedite cases of Ukrainians with urgent humanitarian, medical or otherwise "extraordinary" needs.
Nicole Sganga contributed reporting.
Camilo Montoya-Galvez is the immigration reporter at CBS News. Based in Washington, he covers immigration policy and politics.
source: https://www.cbsnews.com/news/ukraine-refugee-sponsorship-program-us-resettlement/