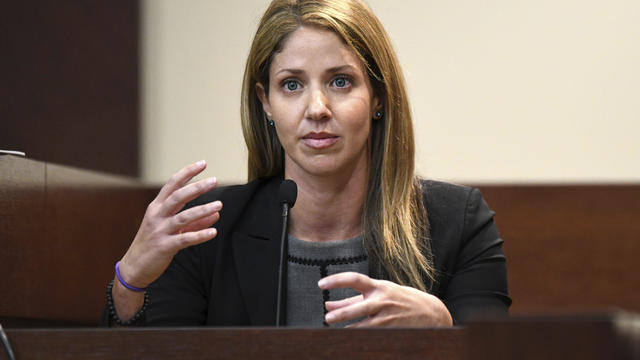 A Florida dentist was arrested Thursday on charges that he hired hit men eight years ago to kill his sister's ex-husband, a prominent law professor, so she could move back to the Fort Lauderdale area from Tallahassee with her two children.
Charles Adelson, 45, was being held Thursday without bond at the Broward County jail on charges of first-degree murder, conspiracy to commit murder and solicitation to commit murder after being arrested at his home by U.S. marshals. He is awaiting transfer to Tallahassee. His attorney said Thursday he is innocent.
Adelson and other members of his family have long been cited by prosecutors and investigators as potential suspects in the July 18, 2014, killing of Florida State University law professor Daniel Markel by two men at his Tallahassee home. Markel, 41, had been married to Wendi Adelson, who had been unable to return to South Florida because Markel had joint custody of their young children after a highly contentious divorce.
Wendi Adelson had told authorities that her brother had joked about hiring a hit man as a divorce present but had decided instead to buy her a television, CBS Miami reported.
Leon County State Attorney Jack Campbell said in a statement that Adelson was indicted by a grand jury after technicians were able to enhance the sound on an April 2016 video recording made secretly of him talking to a former girlfriend and employee, Katherine Magbanua. She was charged six months later with organizing the killing. Adelson had been under surveillance.
"This recording includes statements by Charles Adelson which can be heard clearly for the first time," Campbell said.
Magbanua is scheduled to be retried next month on a first-degree murder charge after a jury hung in 2019. Prosecutors say she hired Sigfredo Garcia, the father of her two children, to commit the murder and that he enlisted the help of his childhood friend, Luis Rivera.
Prosecutors said the two men drove from South Florida to Tallahassee to execute the plan, stalking Markel on the morning of the shooting as he dropped off his children at day care and stopped at the gym. When Markel returned home, Garcia shot him as he sat in his car talking on his cellphone.
Garcia had maintained that the fatal shots were fired by Rivera, CBS Miami reported.
Garcia is serving a life sentence after being convicted of first-degree murder in 2019. Rivera is serving a 19-year sentence after pleading guilty to second-degree murder in exchange for testifying against Garcia and Magbanua.
David Markus, Adelson's attorney, said his client is innocent and tied the arrest to Magbanua's retrial.
"Prosecutors have no new information that led to this arrest. The timing sure does stink, doesn't it? On the eve of a long-awaited trial of (Magbanua), this move has the smell of desperation," Markus said in an emailed statement.
Campbell did not specify which statements led to Adelson's arrest, but in the 41-minute recording released Thursday afternoon, Adelson sits with Magbanua at a noisy Mexican restaurant. The hidden camera recording them appears to be sitting on a bench across the aisle.
Dressed in shorts and a T-shirt, Adelson first told Magbanua that if the police knew anything, "we would have already gone to the airport." He then told her that the police simply putting someone in a car or with someone else isn't enough for a conviction — they and prosecutors need proof the person was involved in the crime.
He then told her that someone had approached his mother and demanded money. He told Magbanua that the man knew details about the killing and mentioned her.
But as he contemplated whether the extortionist might be an undercover police officer trying to rattle his mother, he denied any involvement in the shooting - something he did repeatedly throughout the rest of the conversation.
"If it's a cop, I'm happy because I've got nothing to hide," Adelson told Magbanua.
He then told Magbanua she needs to contact the extortionist and tell him that a one-time payment will be made, but the Adelsons will contact the police if he or anyone else demands further money.
"The whole time you are talking, you just say, 'I don't know what's going on,'" Adelson told her. "If it's the police, they can't take the money. They won't even come meet you."
He tells Magbanua that his mother can't meet with the extortionist because that will just lead to further demands.
"If my parents were guilty, they may think they have a really big fish on the line that's gonna pay them monthly." he said. He tries to calm Magbanua's worries by telling her, "You giving somebody some money is not an admission of any kind of guilt."
source: https://www.cbsnews.com/news/charles-adelson-charged-hit-men-kill-daniel-markel-sister-ex-husband-florida/