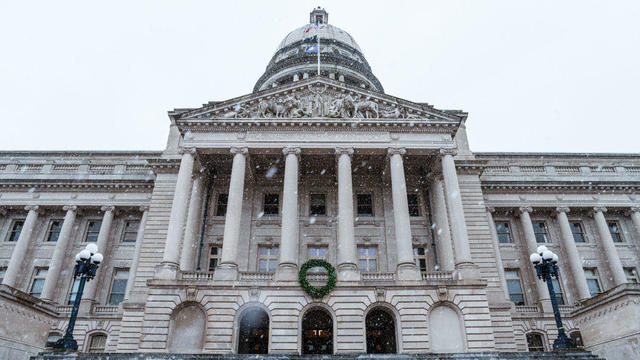 New abortion restrictions passed by Republican lawmakers over the Democratic governor's veto will force the only two abortion clinics in Kentucky to stop providing the procedures for women, at least temporarily, while the new law is challenged in court, abortion-rights activists said Wednesday.
The law will draw immediate federal lawsuits, and attorneys for the clinics will seek a ruling to block the measure to allow the clinics to resume abortions while the case is litigated, the activists said. The two abortion clinics in Kentucky are in Louisville, the state's largest city.
Immediately after the GOP-led legislature finished overriding Gov. Andy Beshear's vetoes, the activists said the clinics will be unable to comply with the new restrictions because the state hasn't set up a now-mandated regulatory process. The measure takes effect immediately.
"Because the law is impossible to comply with, it amounts to a de facto abortion ban, thus violating patients' federal right to abortion under Roe v. Wade," abortion-rights groups said in a news release.
Planned Parenthood and the American Civil Liberties Union will file suit challenging the measure, the release said.
The chants of abortion-rights supporters echoed through Kentucky's Capitol as the legislature swept aside the governor's veto. The bill calls for regulating the dispensing of abortion pills, but the state hasn't yet set up the registration process, the groups said. It would require women to be examined in person by a doctor before receiving the medication.
That section of the bill is part of a nationwide push by anti-abortion groups to limit the ability of physicians to prescribe abortion pills by telemedicine, and comes in response to the increased use of pills rather than surgery to terminate early pregnancies.
About half of all abortions performed in Kentucky are the result of medication procedures.
The measure also requires new reporting requirements that violate patient privacy, the abortion-rights groups said.
Another key part of the bill bans abortion after 15 weeks of pregnancy. Kentucky law currently bans abortions after 20 weeks of pregnancy.
The proposed 15-week ban is modeled after a Mississippi law the Supreme Court is considering in a case that could dramatically limit abortion rights. By taking the preemptive action, the bill's supporters say Kentucky's stricter ban would be in place if the Mississippi law is upheld.
About two dozen abortion-rights supporters chanted "bans off our bodies" at the bottom of the stairs leading to the Kentucky House chamber earlier Wednesday as the lawmakers debated the abortion measure. Lawmakers on both sides of the debate mentioned the demonstrators, whose voices could be heard in the chamber as the emotional debate continued.
"It absolutely makes me sick to have to listen to what's going on out there," Republican Rep. Norma Kirk-McCormick said.
The House overrode Beshear's veto on a 76-21 vote. That sent the measure to the Senate for the final vote. Republicans have supermajorities in both chambers. The demonstrators moved to the other side of the Capitol Wednesday evening and chanted as the Senate debated the measure. The Senate overrode the veto on a 31-6 vote.
Opponents also condemned the bill for failing to exclude pregnancies caused by rape or incest.
"Those are violent crimes," Democratic Rep. Rachel Roberts said. "This bill forces those women to be violated again."
In pushing for the override, Kirk-McCormick said: "The abortion of a baby is plain wrong. And I pray that God would have mercy on anyone that would take the life of a child. There's no mercy for that baby in abortion."
The strict limits on abortion weren't the only social issues legislation taken up by Republican lawmakers during the frenzied veto session. They also used their lopsided majorities to finish overriding a Beshear veto of their effort to ban transgender athletes from participating in sports. The override votes won by wide margins in both chambers over the objections of opponents.
"This bill is discrimination in search of children," Democratic Rep. Josie Raymond said.
The measure would bar transgender girls and women from playing on sports teams matching their gender identity from sixth grade through college. Supporters say it would ensure girls and women compete against other "biological females."
"The athlete wants a fair playing field," Republican Sen. Donald Douglas said. "They don't care about all this other social stuff."
Republican-led states increasingly have adopted such prohibitions on transgender girls or women, though the culture war-related bans have been challenged in several states as violations of federal law. Opponents of the Kentucky measure predicted the measure also will end up in court.
"The fight won't stop here," said Chris Hartman, executive director of the Fairness Campaign.
source: https://www.cbsnews.com/news/kentucky-abortion-ban-andy-beshear-veto-override/