Prime Minister Jacinda Ardern has touched down in Singapore after a clean Covid-19 test cleared the way for her first overseas trip since 2020. 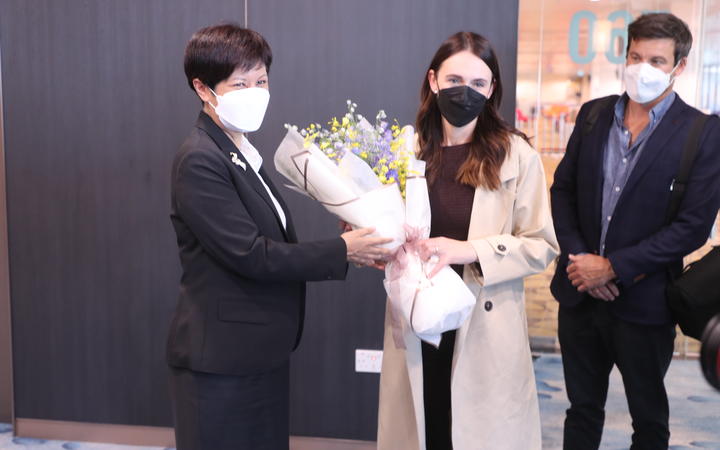 The RNZAF Boeing 757 arrived at Singapore's Changi Airport at about 8pm (NZT) this evening after departing Auckland's Whenuapai Airbase early this morning.

All were tested for Covid-19 before departing Auckland and again on arrival in Singapore. They will administer daily rapid antigen tests while abroad.

Speaking at Whenuapai before departure, Ardern thanked the team for "giving up [their] precious time" to represent the country abroad.

She said she was "very excited" about heading overseas after a more than two-year hiatus.

"One of the parts of the job, when you're auditioning for the role, that you don't anticipate being as significant is the foreign policy side," Ardern said.

Ardern is scheduled to spend two nights in Singapore before flying on to Japan for another three nights.

But Japan has strict entry requirements barring anyone who returns a faint positive - even if from a previous infection.

"If anyone succumbs to Covid over the course of this trip, we will of course make sure that we are wrapping all the care and support around you that we can, but we will leave you there!" Ardern told the delegation.

If Ardern contracts the virus while overseas, Trade Minister Damien O'Connor will take over while she isolates.

Ardern will be officially welcomed to Singapore at the presidential mansion Istana on Tuesday afternoon, before a sit-down and then media conference with Prime Minister Lee Hsien Loong.

Both Singapore and New Zealand are members of the trans-Pacific trade agreement (CPTPP) - a subject sure to be raised between the two leaders.

Ardern has already flagged that she is keen to discuss the possibility of enticing the United States to join the pact.

Both prime ministers will also discuss matters of regional security, with New Zealand particularly concerned about China's recent flexing in the Pacific through a proposed security pact with Solomon Islands.

Later in the evening, Ardern will address Singaporean entrepreneurs and business leaders at a gala dinner promoting NZ trade and tourism.