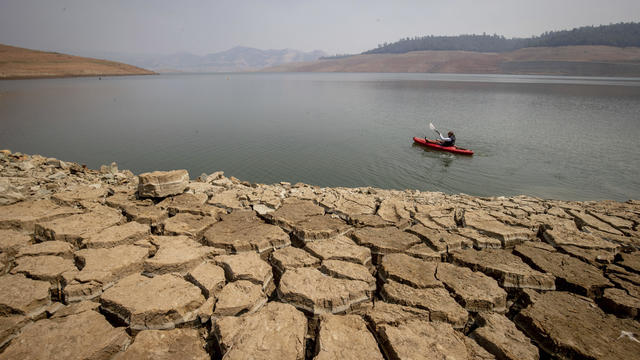 With issues like the economy and inflation, crime, and the war in Ukraine weighing most on Americans' minds, the percentage who think climate change needs to be addressed right now has dipped some since one year ago.
This dip in urgency, while not steep, is widespread. Fewer people across age, race, and education groups, as well as partisan stripes, think climate change needs to be addressed right away than thought so a year ago. Still, most Americans do think it's an issue that needs to be addressed now or least in the next few years.
A year ago, when more Americans rated the national economy as "good" than they do now, more people saw climate change as urgent. As views of the economy have grown more negative, the percentage saying climate change needs to be dealt with immediately has ebbed.
Pocketbook issues like the economy and inflation rank as top priorities for Americans. Of the seven issues asked about in our polling, climate change (along with COVID-19 — also  at 39%) ranks at the bottom as "high priority" issues.
Climate change: A priority issue for Democrats
Climate change is a higher-priority issue for Democrats than it is for Republicans and independents. The issue is not of great concern to most Republicans — six in 10 of them call it a "low priority." About four in 10 don't think it needs to be addressed at all.
Americans who say climate change should be a high priority (a largely Democratic group) believe it's something people need to address right now (more than eight in 10 do).
Historically, Democrats have mostly favored policies and efforts to reduce climate change, whereas Republicans have been less supportive or opposed to such policies.
Among Democrats, climate change is a bigger priority for liberals than it is for moderates. Among liberal Democrats, climate change slightly outranks economic issues as a "high priority," while moderates place economic issues ahead of climate change.
In a February CBS News poll, 55% of liberal Democrats said the Biden administration was not focused enough on climate change, compared to 39% of moderate Democrats who held that view.
But rank-and-file party members do give President Biden good marks for handling the issue. Most Democrats — both liberals and moderates — approve of the job he is doing handling issues of climate change. Most Republicans and independents do not.
Overall, 43% of Americans approve of Mr. Biden's handling of climate change. While not in positive territory, it is higher than his approvals on Americans' most pressing issues — the economy and inflation.
U.S. energy policy
One of the proposed ways to slow the effects of climate change is transitioning to renewable energy sources. More than half of Americans think U.S. policies should encourage electricity from solar and wind sources, a figure that rises to 79% among those who think people need to address climate change right now.
Those who feel climate change can wait to be dealt with further in the future or not at all (a Republican-leaning group) tend to prefer U.S. policies that encourage electricity from oil and coal or not encourage power sources either way.
Kabir Khanna contributed to this report.
This CBS News/YouGov survey was conducted with a nationally representative sample of 2,062 U.S. adult residents interviewed between April  5-8, 2022. The sample was weighted according to gender, age, race, and education based on the U.S. Census American Community Survey and Current Population Survey, as well as to 2020 presidential vote. The margin of error is ± 2.8 points.
Toplines
source: https://www.cbsnews.com/news/fewer-americans-see-climate-change-as-priority-opinion-poll-2022-04-22/