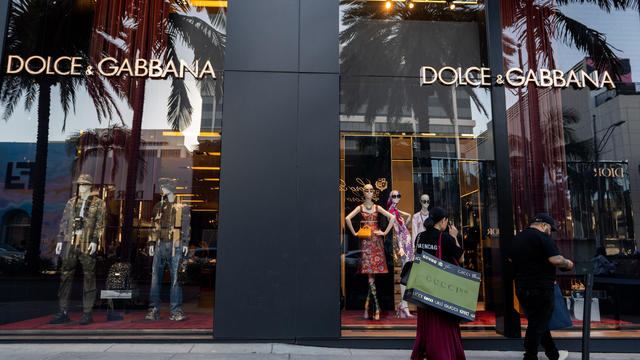 Los Angeles street gangs are behind brazen robberies in which people are followed home from fancy locations, stripped of a fortune in jewelry or other goods and sometimes shot, police said Tuesday.
At least 17 gangs, most of them based in South Los Angeles, have independently staged robberies, sometimes using spotters to target people wearing high-end watches or driving expensive cars, Capt. Jonathan Tippet, who spearheads an LAPD "follow-home robbery" task force, told the city Police Commission.
As many as five carloads of people have followed home some targets, swarming them to steal watches, handbags or cars before they have much of a chance to resist, Tippet said.
The Los Angeles Police Commission retweeted a local TV report showing video of some of the robberies.
A woman is run down and robbed of her watch by gunmen Downtown. It's one of more than 200 "follow-home" robberies carried out by 17 South L.A. street gangs, the LAPD says. Eyewitness News with the troubling trend frustrating police. Tonight at 11 from ABC7 https://t.co/7mApPOpStw pic.twitter.com/WSxK6wBJNk
In one case, a man was arrested this month on suspicion of robbing a victim of two watches worth an estimated $600,000.
"We have seen countless individuals traumatized by having a gun pointed at them," Tippet said. "Many others are dealing with the trauma and injuries from being tackled, kicked, beaten, punched and are pistol-whipped to the head."
Tippet said there were 165 such holdups last year and 56 so far this year, including five in the past two days. Thirteen victims were shot, including two people who died. Fifty robberies took place in the LAPD's Hollywood Division and nearly as many in the Wilshire Division, along with many in an area that includes the downtown Jewelry District.
Such attacks were "almost unheard of" before last year, Tippet said.
"In my 34 years in the LAPD, I have never seen this type of criminal behavior" in such large, coordinated groups, Tippet said.
In one holdup Monday, a woman stopped at a light had her car window smashed and when she tried to run off, the robbers struck her with their car, according to video released by police. The thieves then got out and snatched the woman's watch, which she had thrown into the street.
Video of two recent holdups supplied by the LAPD show an "outrageous display of arrogance on the part of these criminals, to think that they can just run amok in our city and terrorize our citizens," Police Commission President William Briggs said.
The task force has made several dozen arrests for robbery, weapons crimes and attempted murder along with four arrests on suspicion of murder, Tippet said.
source: https://www.cbsnews.com/news/follow-home-robbery-los-angeles-gangs-police/