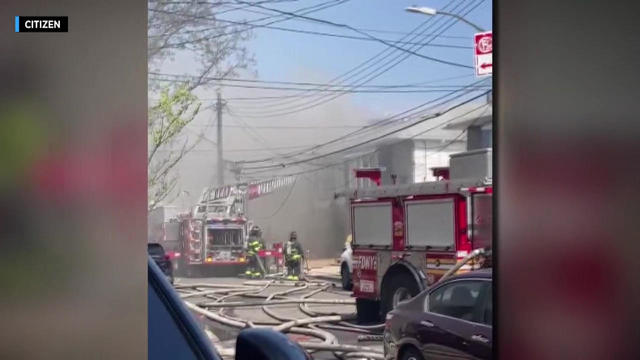 CLICK HERE for live updates:
NEW YORK -- A firefighter died Sunday while battling a house fire in Canarsie, Brooklyn on Sunday afternoon, Mayor Eric Adams confirmed.
The fallen firefighter was identified as 31-year-old Timothy Klein, a six-and-a-half-year veteran of the force, CBS2's Andrea Grymes reported.
More than 100 firefighters were at the scene on Avenue N in Canarsie, officials said.
Crews discovered the fire in a peaked roof at a private home there after getting calls around 1:40 p.m. Sunday, according to officials.
FDNY members are currently operating at 3-alarm fire at 108-26 Avenue N Brooklyn. pic.twitter.com/QMPhDWaxIs
At least five other firefighters were injured and one person was treated at the scene. There was no immediate word on their conditions.
FDNY did not immediately say if anyone was in the house when the fire started.
This is a developing story. Stay with CBS2, CBS News New York and CBSNewYork.com for updates.
Andrea Grymes joined CBS2 News as a general assignment reporter in July 2013. She also co-anchors the weekend morning newscasts.
source: https://www.cbsnews.com/newyork/news/fdny-crews-battling-3-alarm-fire-in-brooklyn/