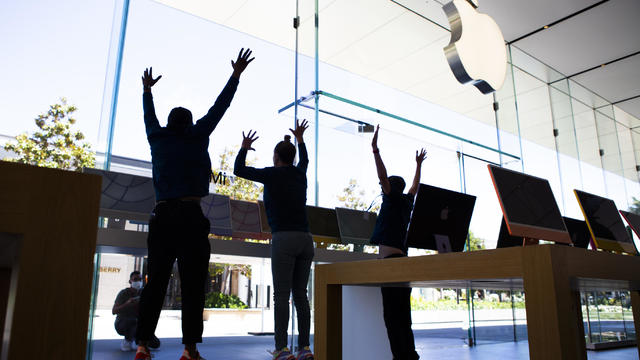 Employees at multiple Apple stores across the U.S. have taken steps to form unions and bargain for higher pay and better benefits.
Retail workers at an Apple Store in Atlanta on Wednesday became the first group of employees at the technology giant to officially file a petition with the National Labor Relations Board to hold a union election.
At least 70% of the store's 107 employees have signed union authorization cards, according to Communications Workers of America, which would represent the workers should they vote to unionize.
The vote could take place as early as next month.
The official filing comes days after employees at Apple's retail store in New York City's Grand Central Terminal announced they too are collecting signatures in an effort to unionize and lobby their employer for better working conditions overall.
"Employees say that they face low wages in a very high-stress work environment that includes persistent exposure to COVID-19 and other challenges," CBS News tech reporter Dan Patterson said.
Workers at Apple's Grand Central Terminal location are asking for a $30 minimum wage and better benefits. Currently, retail store workers earn a minimum of $20 an hour, an Apple spokesperson said.
Apple salespeople also "want to advance in the same or a very similar way as executives or people who work in offices at Apple," Patterson said. "They say they're treated often like second-class citizens, even though they work hard."
A vote in favor of unionizing at one store could encourage employees at other Apple stores to follow suit.
Indeed, workers at at least three other Apple stores are already considering similar movements, according to Patterson.
"This is part of a larger trend that includes technology stores and companies like Starbucks and Amazon — where warehouse employees have unionized all in the last several months," Patterson said.
The move by Apple employees could inspire workers at other companies, too.
"You have to think that this vote could potentially empower not just other Apple stores to unionize, but across the spectrum when it comes to tech and other retail outlets," Patterson said.
Apple store workers at the company's Grand Central Terminal store have been signing union authorization cards since February.
"It is pretty advanced at this point," Patterson said.  "Some people say it could be pretty likely they vote to unionize."
source: https://www.cbsnews.com/news/apple-union-workers-retail-stores-labor-movement/