A New Zealand Defence Force Hercules has taken off for Europe on a deployment to distribute donated military aid for Ukraine. 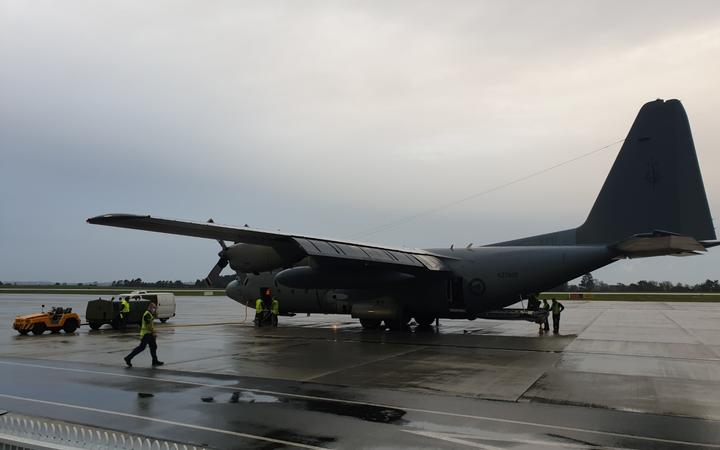 The Defence Force Hercules at Whenuapai Air Base on Wednesday as it is readied to leave for Europe. Photo: RNZ / Jordan Bond

The C-130 Hercules carrying nine personnel took off from Whenuapai Air Base on Auckland on Wednesday morning.

The remaining 41 troops will go on commercial flights.

The deployment is New Zealand's biggest to Europe since the early 1990s and will be stationed there for two months.

Defence Minister Peeni Henare was at the air force base and said the Hercules would arrive in Europe in about five days after making stops along the way.

Defence Force staff would help with logistics, and neither staff nor the Hercules were intended to go into Ukraine, he said.

"We will continue to be responsive to the co-ordination led by the UK and the need to support Ukraine."

"None of our people will be entering Ukraine, we'll be moving capabilities to wherever they're required provided that it is safe for us to do so," he said on Tuesday.

Although the military's Hercules aircraft fleet was ageing, Gilmour said he was confident the aircraft would be up to the task.

The government is sending $7.5 million to the United Kingdom to procure weapons and ammunition as part of its latest suite of supports.

Cabinet also agreed to extend New Zealand's financial contribution by an extra $13 million - including the weapon and ammunition funding.