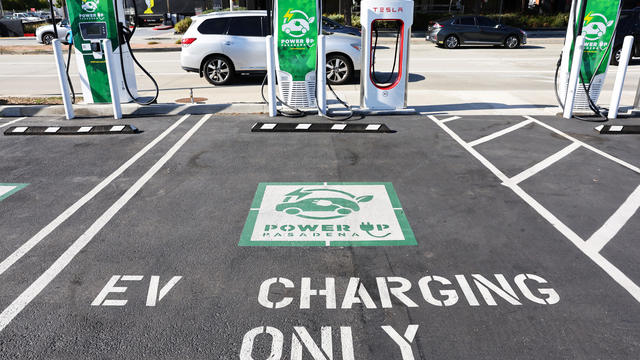 One way to avoid the pain at the pump is to never have to go there. Katie Mitchell bought an electric car in January, and says she's now saving hundreds of dollars a month by charging up instead of filling up.
When she watched gas prices skyrocket in recent months, she said she felt "lucky" and "grateful."
"It's one of the things that I give thanks for," she said of her decision.
A new CBS News poll found 59% of Americans would or might consider buying an electric vehicle. Those who would cited the environment and high gas prices as their top reasons.
But a lot of the electric models that automakers keep announcing are not yet available, and a looming battery shortage could pump the brakes even more. Tesla is the electric vehicle market leader, but the waiting list for its cars is several months long.
"People are begging for a better, less fuel intensive way to drive to be divorced of fuel pump prices, and yet finding any new car — let alone a model that's electric — is so hard right now," Brian Cooley, editor at large for CNET, told CBS News.
The CEO of electric vehicle automaker Rivian, which is struggling to deliver its new vehicles, warned this could be worse than the current chip shortage as demand for the materials inside the batteries — specifically lithium —  skyrockets.
The U.S. has just one lithium-producing mine in southern Nevada, providing less than 2% of the world's supply.
Mitchell is glad she bought her car when she did.
"I feel a little bit like an accidental genius," she said.
Ben Tracy is a CBS News senior national and environmental correspondent based in Washington, D.C.
source: https://www.cbsnews.com/news/gas-prices-electric-vehicles/