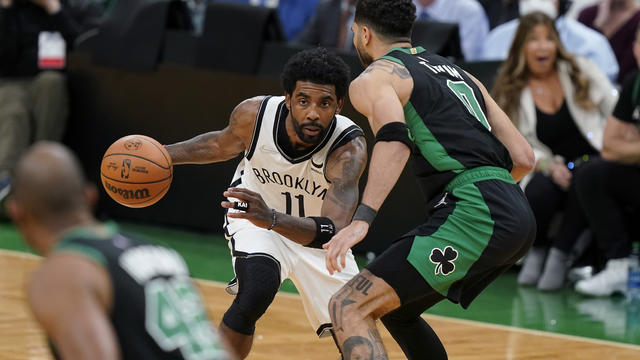 The NBA has fined Brooklyn Nets point guard Kyrie Irving $50,000 after he made "obscene gestures" and used "profane language" during a game this week, the league announced Tuesday.
On Sunday, during the first round of the Eastern Conference playoffs against the Boston Celtics, Irving gave the crowd at TD Garden the middle finger, according to CBS Sports, and directed "profane language" toward them, Byron Spruell, president of league operations, said in a statement. The crowd had been booing him and chanting "Kyrie sucks," CBS Sports reported.
The Nets lost to the Celtics 115-114.
During a post-game interview, Irving said he reacted to fans with the "same energy" he was met with.
"All's fair in competition," he said. "If somebody is going to call me out of my name, I'm going to look them straight in the eye and see if they are really about it. Most of the time they're not."
The fine comes following Irving's recent return to playing home games. A local COVID-19 vaccination requirement had barred him from playing or practicing with his teammates at the Barclays Center in downtown Brooklyn. But last month, New York City Mayor Eric Adams lifted the restrictions, allowing for performers and athletes like Irving to perform or play in local venues without proving that they're vaccinated.
The Nets are scheduled to play the Celtics at TD Garden again on Wednesday night, according to CBS Sports.
Tori B. Powell is a breaking news reporter at CBS News. Reach her at [email protected]
source: https://www.cbsnews.com/news/kyrie-irving-brooklyn-nets-fined-obscene-gestures-boston-celtics/