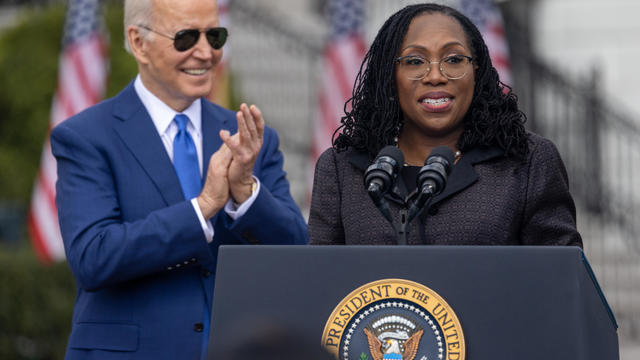 Seeking to capitalize on Judge Ketanji Brown Jackson's historic confirmation as a Supreme Court associate justice, a coalition of progressive organizations are investing $1 million in a new ad campaign targeting Black audiences.
Building Back Together, the Black Women's Leadership Collective and She Will Rise are spearheading the seven-figure ad buy, the largest to date by the groups.
"For Black women, for Black Americans, but for all Americans, I mean, my hope is that all Americans feel pride in this moment and what it says about what is possible in our country," said Karen Finney, co-convenor of the Black Women's Leadership Collective.
The campaign features an ad, entitled Changed, that will air in Georgia, Wisconsin and Pennsylvania as well as on digital and social media platforms primarily via Black-owned outlets and publications, according to a Building Back Together spokesperson. CBS News exclusively viewed the ad, which highlights the fulfillment of President Biden's 2020 campaign pledge to nominate a Black woman to the Supreme Court.
"In 233 years, not a single Black woman has served on the Supreme Court. President Biden changed that," a female narrator states at the beginning of the 30-second spot, which features a montage spliced with images of Jackson throughout the confirmation process.
"President Biden has fought to ensure the doors to opportunity are open to every person in this country, and we're wasting no time to communicate that the President is delivering on his promise to make our government look more like America," said Mayra Macías, Chief Strategy Officer for Building Back Together.
The campaign will also include in-person grassroots events, such as block parties, to amplify the coalition's message with local partners in Atlanta, Milwaukee and Philadelphia. In Washington D.C., She Will Rise collaborated with several groups and the city to host a block party and the unveiling of a mural showcasing Jackson alongside her personal heroine Constance Baker Motley, who was the first Black woman to become a federal judge.
"Black women make up less than two percent of the federal judiciary currently so we have a lot of work to do, but I want to commend this administration," She Will Rise co-founder Kim Tignor told CBS News earlier this year. "This woman's work will impact generations. And I think that a lot of times it goes unsaid or unnoticed, the impact that the Supreme Court has on your day-to-day life."
The campaign builds on previous investments by the coalition, which released TV, digital and radio ads during the confirmation process to promote Jackson's qualifications and personal story. The 51-year-old mother of two and Harvard graduate served on the D.C. Circuit Court of Appeals prior to her nomination. She was confirmed by the Senate Thursday in a bipartisan vote of 53-47.
The latest push comes just over six months before the midterm elections. A new CBS News poll shows President Biden's approval rating hit a low of 42 percent. A majority of respondents gave the president low marks for his handling of issues ranging from the economy to crime and immigration.
Finney, who is also a Democratic consultant, points out that Black women were integral to Biden's election. She said the alliance aims to continue the conversation around Jackson's confirmation and believes it will resonate with voters come November.
"When the Supreme Court starts that first Monday in October and she comes out and we see her there among her colleagues, that's just a few weeks before Election Day," Finney noted. "So there will be a powerful reminder to say your vote matters, you made this happen, that's why you've got to come out and vote."
Nikole Killion is a congressional correspondent for CBS News based in Washington D.C.
source: https://www.cbsnews.com/news/judge-jackson-supreme-court-confirmation-celebration-record-ad-buy/