Other people were in the house when Idaho murder 911 call was made, police say 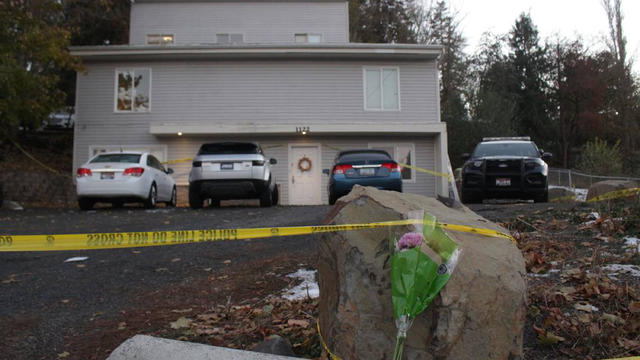 There were additional people other than the two surviving roommates inside the house where four University of Idaho students were found stabbed to death at the time the 911 call was made, police revealed Sunday. According to Moscow Police Chief James Fry, the 911 call was made using one of those roommates' phones, but he would not confirm the caller's identity.
Fry said at a Sunday press conference that police do not believe the caller is the killer. A week after the murders, police still have no suspect.
All four victims were members of fraternities and sororities: seniors Madison Mogen, 21, of Coeur d'Alene, Idaho, and Kaylee Goncalves, 21, of Rathdrum, Idaho; junior Xana Kernodle, 20, of Post Falls, Idaho; and freshman Ethan Chapin, 20, of Mount Vernon, Washington. The women were roommates, and Chapin was dating Kernodle.
Police said Chapin and Kernodle were at Sigma Chi house on the University of Idaho campus and returned home around 1:45 a.m. on Nov. 13. Police said Mogen and Goncalves were at a bar called The Corner Club in downtown Moscow, left the bar and stopped at a food truck, and then also returned home at about 1:45 a.m.
Police said Saturday that the two surviving roommates were out separately in Moscow in the late night hours of Nov. 12, and both had returned home by 1 a.m. on Nov. 13.
The bodies were found around noon on Sunday, Nov. 13.
Moscow police previously said officers responded to a 911 call made at 11:58 a.m. about an "unconscious person." Officers arrived to find all four victims deceased on the second and third floors of the home.
Fry on Sunday said police are not sure exactly how many people were in the home when the 911 call was placed, but that there were "other friends that had arrived at the location" present. He did not specify when they arrived.
Police on Sunday also said another person seen in a video of Mogen and Goncalves at the food truck and the "third party" that drove the two of them home are not involved in the killings.
Mogen and Goncalves also made multiple calls to a male who police haven't identified. Fry on Sunday said police believe those calls have no connection with the killings.
According to Moscow police, the coroner said all four victims were likely asleep, some had defensive wounds and each was stabbed multiple times. There was no sign of sexual assault, police said.
Police said the two surviving roommates slept through the stabbings and are not involved in the killings.
Capt. Roger Lanier on Sunday said police had previously seized the contents of three dumpsters in the area of the crime, but "nothing of note was discovered."
Investigators were also asking local businesses if they had recently sold any fixed-blade knives, police said Sunday.
The killings have shaken Moscow, an Idaho Panhandle town of 25,000 residents that last saw a homicide about five years ago. The leafy college town is about 80 miles south of Spokane, Washington.
source: https://www.cbsnews.com/news/idaho-college-murders-911-call-roommate-phone/