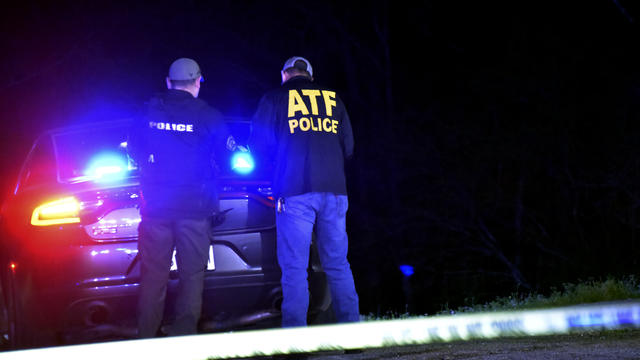 A 21-year-old man has been arrested in connection with a fatal armed robbery at a Georgia gun range that left three members of a family dead last week.
Jacob Christian Muse, of College Park, is charged with three counts of malice murder, the Georgia Bureau of Investigation said in a news release Friday.
The coroner in Coweta County found the victims, who were his parents and son. Richard Hawk came by the Lock Stock & Barrel Shooting Range and was the person who found the victims: Thomas Hawk, 75, the owner of the range; his wife, Evelyn, 75; and their grandson, Luke, 17.
Investigators said that as many as 40 guns and the range's surveillance camera were also stolen in the April 8 incident.
The shooting range is in rural Coweta County, about 50 miles southwest of Atlanta.
Police Chief Steve Whitlock said the Hawk family was well-known and well-respected in their small, tight-knit community. The Hawks had operated Lock Stock & Barrel for nearly 30 years. Their grandson was on spring break, helping his grandparents at the shop.
Coweta County Sheriff Lenn Wood had called the killings "senseless and tragic" in a statement on Facebook following the shooting, and said he was "fervently praying that God will use our law enforcement community and the Coweta Community to bring justice swiftly."
"Family was taken from the Hawk family, and us, way too soon and we are left with hurt, pain, and very little answers," he said in last week's statement.
Muse was booked into the Coweta County Jail, officials said. Authorities did not release additional information about his arrest and it was not immediately clear whether Muse had an attorney who could comment.
source: https://www.cbsnews.com/news/jacob-muse-murder-charges-georgia-gun-range-killings/