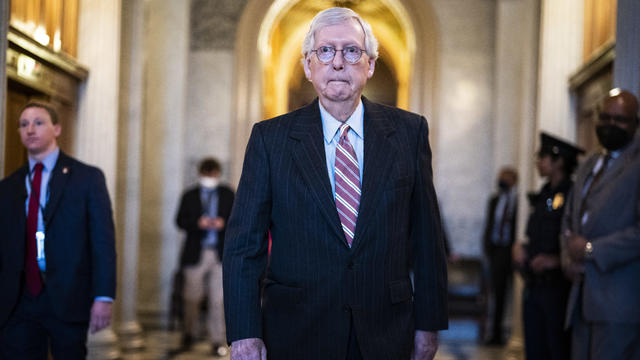 A super Pac affiliated with Senate Minority Leader Mitch McConnell is placing more than $140 million advertisement buys for the final stretch of the 2022 midterm elections this fall.
The Senate Leadership Fund announced on Monday that the group is buying $141 million in ads in seven key states, starting in September. Politico was first to report the reservations.
The group's ads will try to protect Republican-held seats in North Carolina, Pennsylvania and Wisconsin and try to flip Democratic-held seats in Arizona, Georgia and Nevada. A portion of the spending will also go to Alaska to help GOP Senator Lisa Murkowski, who is facing a Trump-endorsed challenger.
"This is such a strong year that we need to invest as broadly and deeply as we can," Steven Law, Senate Leadership Fund's president, told Politico in an interview. "In the Senate, majority control is everything. It determines what happens on the floor and what doesn't happen."
There will be a fierce battle for the Senate in November, which is currently split 50-50. The states that Senate Leadership Fund is targeting with its ad buy are among the most competitive seats on the map.
One key battleground not included in the advertising buys at this point is New Hampshire. Democratic incumbent Maggie Hassan is facing a tough bid for reelection, but some Republicans, including Trump adviser Corey Lewandowski, have raised questions about the candidates on the GOP side. Law told Politico that he feels "very confident that we will end up playing in New Hampshire."
The spending will include $37 million in Georgia, in an attempt to unseat Democratic Senator Raphael Warnock, $27 million in North Carolina, which has an open seat currently held by Republicans, $24 million in Pennsylvania, which is also an open GOP-held seat, $15 million each in Nevada, where Republicans want to defeat Democratic Senator Catherine Cortez Masto, and Wisconsin, where Republican Ron Johnson is up for reelection. There is also $14 million in planned spending in Arizona, where Republicans want to defeat Democratic Senator Mark Kelly.
Records filed with the Federal Election Commission show that Senate Leadership Fund raised about $25 million in contributions during the first quarter and has $72 million cash on hand.
Senate Majority PAC, the Democrats' super PAC, had about $36 million cash on hand at the end of February. The group has moved to set aside $106 million for ads in Arizona, Georgia, Nevada, Pennsylvania and Wisconsin starting in August, according to Politico.
A significant portion, $7.4 million, is also being set aside to help Murkowski, who is running for her fourth term. Alaska is holding a nonpartisan primary for the first time this year, meaning the top four candidates will advance to the general election. The November winner will be determined using ranked-choice voting, which will likely make the challenge to Murkowski more difficult.
CBS News political reporter.
source: https://www.cbsnews.com/news/mitch-mcconnell-pac-ad-buy-2022/